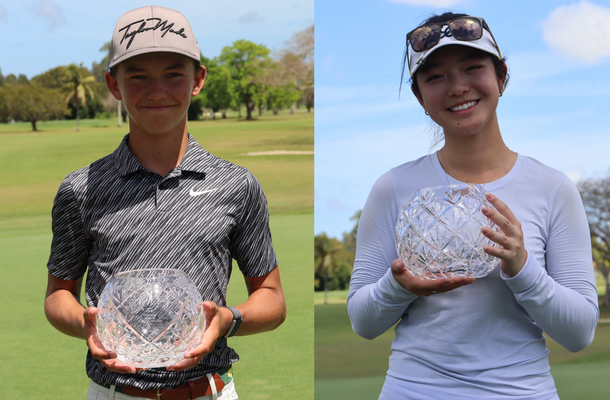 Davenport, Fla. – The fifth event of the 2022-2023 FSGA Winter Series made its way to The Providence Golf Club for a Four Ball competition. Brett Riotto and Troy Vannucci teamed up to take home the title in the Mid-Amateur Division. In the Senior division, Jeff Kaufman and Steve Horner lead wire-to-wire to win their division while Cory Walker and Tom Riley dominated the Super-Senior division.

Despite cooler temperatures, Brett Riotto and Troy Vannucci came out of the gates firing in the first round with a 9-under 63. Vannucci's six birdies along with Riotto's three birdies gave them a 5-shot lead over Will Peterson and Will Sprague. This left the Peterson/Sprague pair with a lot of work to be done to challenge for the title.

The Final round saw slightly better conditions and more red numbers. With matching 67's, Peterson and Sprague were unable to make up any ground and Riotto and Vannucci comfortably took home the title.

The Senior flight saw some fierce competition for the Winter Series Four-Ball title. At the conclusion of play, Jeff Kaufman and Steve Horner bettered the field to emerge victorious. After a first round 3-under 68, Kaufman and Horner carried a 2-shot lead into the final round's play. The field would battle it out on the second day but a birdie on the 17th hole by Kaufman all but sealed the 1-shot victory at 7-under par.

Finishing in second position, one shot back from the champions were Rokki Rogan and Bill Barnes with a total of 6-under par.

Corey Walker and Tom Riley dominated the Super-Senior division with a 6-shot margin of victory over the two rounds. This was highlighted by their first round 9-under 63 where Walker made eight birdies. The pair would cruise home to victory with a second round 2-under par 70.

Behind Walker and Riley, the pair of Kim Schwencke and Jim Stone would shoot rounds of 70-69 -139 to finish in second place.

There are three age divisions; Mid-Amateur (25-54), Senior (55-64) and Super-Senior (65 & above). Each player must compete in the age division commensurate with their age as of March 7, 2023. Competitors may not elect to play in a different age division or from a different tee than designated.

Practice rounds are available one week prior to the event on a space available basis and are restricted to after 12:00 PM on weekends.  To arrange your practice round please call the club at 863-424-7916. The cost of a practice round is $55 plus tax.