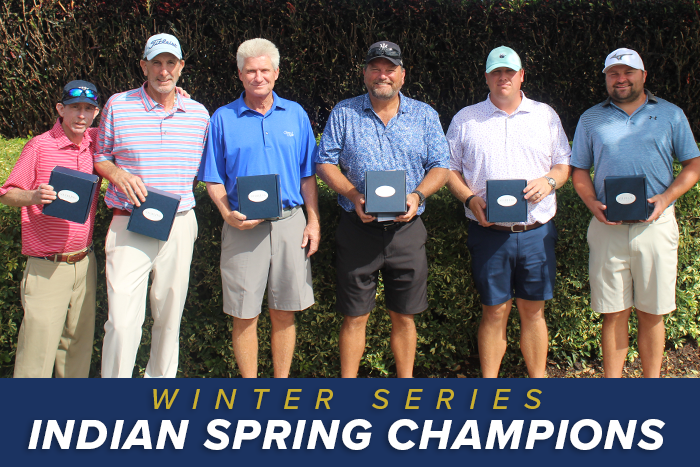 Two teams got off to a great start during round one of the Winter Series Four-Ball. The team of Scott Cox and Ryan Prokay along with the team of Will McClave and Paul Tesori posted rounds of 7-under 65 to share the lead.

During round two, the two teams would go back-and-forth with the lead early in the round. Cox and Prokay secured a one shot lead as the group made the turn to the back nine. The duo did not relinquish the lead, as they made birdie on four more holes on the back nine to take home the win. Cox and Prokay posted a two day total of 13-under 131 while Tesori and McClave would finish second at 9-under 135.

David Abbott and Scott Snyder posted five birdies on the back nine of Monday’s round to find themselves holding a share of the lead through 18 holes.

The team of Mike Fuentes and Tom Whittelsey played steady golf throughout the day to sit atop the leaderboard with Abbott and Snyder after both teams shot rounds of five under-par 67.

The leaderboard would get even tighter in the early stages of the final round. Rich Buckner and Ralph Giansanti birdied four of their first six holes in order to climb into a share of the lead with overnight leaders Abbott and Snyder. The team of Jerry Nick and Charles Siebrecht made their way to the top for a three-way tie.

As groups moved to the back nine, a new team came to take the lead. The team of Doug Snoap and Lloyd Fisher made six birdies on the side to take a commanding lead in the Senior Division. Snoap and Fisher earned the win at 9-under 135. Buckner and Giansanti took second place at 7-under 137.

Last year’s Winter Series Senior points list Champion, Joe Shaktman, found himself atop the leaderboard yet again with partner Steve Sponder. The team posted 7-under 65 to take a three-shot lead heading into Tuesday’s final round.

Shaktman and Sponder continued to build their lead during Tuesday’s final round. Through the first nine holes they found themselves four shots clear of their closest competitors, Bill O’Keefe and Mark Rubin. Sponder and Shaktman claimed the champion title at 10-under 134 while the team of Walter Himelsbaugh and Andrew Padova finished in a tie for second with Marc Rosenbaum and Fred Stern.

There are three age divisions; Mid-Amateur (25-54), Senior (55-64) and Super-Senior (65 & above). Each team will compete in the age division commensurate with the youngest players age as of March 8, 2022. Competitors may not elect to play in a different age division or from a different tee than designated.

Practice rounds are available one week prior to the event on a space available basis and are restricted to after 12:00 PM on weekends.  To arrange your practice round please call the club at 561-737-5510. The cost of a practice round is $40 plus tax.