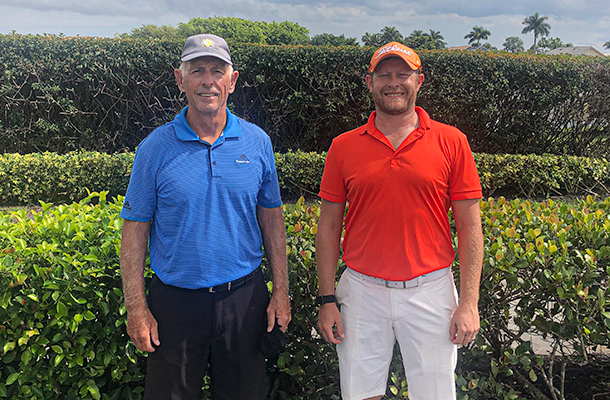 BOYNTON BEACH, Fla. – This week the 2020-21 Winter Series rolled on at Indian Springs Country Club (West). Tom Grady, Jr. came out on top in the Super-Senior Division, and Felipe Hasson emerged as the winner of the Mid-Amateur Division this Tuesday. Robbie Dew took him the win in the Senior Division.

Hasson won his second Winter Series event on Tuesday, finishing with an even-par 142. He followed his opening-round 75 with a 65 on Tuesday–the lowest round in the field. Hasson was six shots back entering the final round, and cleaned up mistakes on Tuesday, recording nine more pars than he had on Monday.

The Miami Beach resident carded 10 birdies over the course of the tournament, edging out Andrew Sharp and Diego Fernandez, who tied for second place with a pair of 2-over 144s

Dew posted a tournament-low 138 en route to his first Winter Series victory. The Palm Beach Gardens native opened the tournament with a 1-under 70 and proceeded to shoot a 3-under 68 on Tuesday. Dew's one-shot victory came over Douglas Jones, who came in second place with a 3-under 139.

Grady, Jr. defeated Fred Stern in a playoff on Tuesday, securing his third Winter Series title. The two both completed the second round at even-par 142, then returned to the par-5 18th hole to decide the winner. Grady, Jr. put his third shot to six inches, defeating Stern with a tap-in birdie on the first and only playoff hole.

Indian Springs Country Club has limited carts with plastic dividers installed like pictured below. Competitors will be asked to share carts in this event with another competitor in the field. We will play in foursomes.

There are three age divisions; Mid-Amateur (25-54), Senior (55-64) and Super-Senior (65 & above). Each player must compete in the age division commensurate with their age as of March 10, 2021. Competitors may not elect to play in a different age division or from a different tee than designated.

Practice rounds are available one week prior to the event on a space available basis and are restricted to after 12:00 PM on weekends.  To arrange your practice round please call the club at 561-737-5510. The cost of a practice round is $40 plus tax.