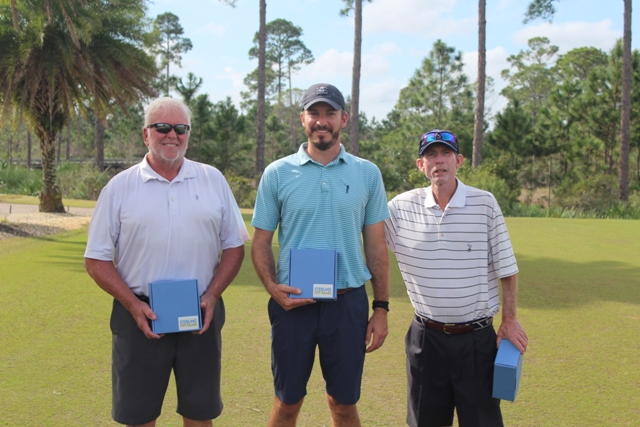 Chris Solomon, of Ponte Vedra Beach, posted two even par rounds to claim his first FSGA win in wire-to-wire fashion. Solomon finished round one in the lead by two strokes after five birdies secured his score of 72. Jackson Sampselle, of Palm Coast, fought to catch Solomon’s lead in round two after posting a round one score of 76. Despite birdying three out of the five finishing holes for an even par second round, Sampselle could not overcome Solomon’s lead. Two birdies on both the front and back nine secured the win for Solomon with a two round total of 144. Sampselle finished in second place, four strokes behind at 148 and Ken Dawson rounded out the top three with scores of 76-74—150.

Mitchel Perez earned first place in the second flight after erasing a three stroke deficit in round two to finish at the top. A first round score of 85 found Maurice Brown, of Orlando, in first place trailed by Scott Jackson, one stroke back, in second place. A round two score of 80 moved Perez into first place at a 168 total. Jackson remained in second place, two stokes behind, tied with Brown after a second round of 85 and 170 total.

Gary Blackwell, of Jacksonville, lit up the leaderboard with a red number in round one to capture first place. Three birdies on the front nine and three back-to-back birdies on the finishing holes of round one clinched first place for Blackwell with a four under-par 68. Michael Arasin and Brian Coffey followed Blackwell at even par in second place.

An eagle on the par five 18th hole earned Blackwell a final round 75 and one under-par 143 victory. Bill Hardaker, of Atlantic Beach, played consistent golf to finish in second place after rounds of 73-74—147, four strokes back. Keith Nagy, of Jacksvonille Beach, and Michael Arasin, of Palm Beach Gardens, tied for second place at 149.

In the second flight, Jim Stuart, of Santa Rosa Beach, finished in first place by two strokes at a 157 total. Stuart finished his second round five strokes better than round one to finish in first followed by Roger Schiffman, of Singer Island, in second place at a 159 total.

Two consecutive winter series events were won by Steve Sponder, of Plantation, due to impressive under-par rounds at The Conservatory at Hammock Beach. Sponder posted two birdies in both the first and second round for two rounds of 71 and a two under-par 142 first place finish. After an even par second round, David Hawkins, of Jacksonville, finished five strokes behind in second place with a 147 total. Consistent rounds of 74 from both Gene Johnson and Bruce Moskovciak claimed a tied for third finish at 148 total.

Doug LaCrosse, of Tampa, posted a comeback second round of one under-par 71 to win first place in the second flight. LaCrosse finished at 148, two strokes ahead of John Milton, of Jacksonville, in second place.

Practice rounds are available one week prior to the event on a space available basis and are restricted to after 12:00 PM on weekends.  To arrange your practice round please call the club at 386-246-6710. The cost of a practice round is $40 plus tax.