Innisbrook Resort & Golf Club, located in Palm Harbor, hosted the prestigious 72nd Florida Open Championship. A total of 156 professionals and amateurs played 36 holes of stoke play on the Island and Copperhead Courses before making a cut to the low 60 players and ties for the final round. Several red numbers sat at the top of the leaderboard after round one making for a tight race heading into day two. Gabriel Lench, of Lake Mary, continues his impressive play after winning the 2018 Amateur Championship three weeks prior. Lench earned the wire-to-wire lead with a round of 68 (-4) on the Island Course and even par round two on the Copperhead Course for a two-day total of 139. Matt Cote, of Palm Harbor, lurks close behind after a great first round of 69 (-3) on the Island Course and an even par second round. Cote will be vying for his first FSGA victory on Sunday. Gene Yang tied Cote for second place with identical rounds of 69-71 for a 140 total, one stroke from first place.

Other notable players in the hunt include: past State Amateur, Amateur Match Play, and Four-Ball Champion, Jacob Huizinga, of Orlando, finished two strokes back due to a 68 in round two on the Copperhead course. Defending Champion, J C Deacon, sits three strokes back while 2017 Player of the Year, Marc Dull, is four strokes from the lead at 143 total. Caleb Johnson, two-time Florida Open Champion, posted rounds of 70-75 to start the final round six strokes behind. 66 players made the cut at seven over-par, 150 total. The final round will be played on the Copperhead course with tee times beginning at 7:30 AM.

The final round proved to be a tough battle on the Copperhead course as Gabriel Lench, Matt Cote, and Gene Yang competed to claim the Championship along with several strong forces lurking close behind. Lench played a steady front nine posting seven pars in a row with one birdie on the seventh hole to turn at one-under par for the day. Starting with a birdie, Cote was ready to overcome Lench’s lead but with two bogies he started the final nine holes at even par for the day. Past FSGA Champion and four-time amateur player of the year, Joe Alfieri, of Lutz, overcame a three stroke deficit to climb up the leaderboard. Alfieri began his final round with three birdies on the front nine and finished the back nine with one birdie and one bogey to finish with a 68 (-3). With a three round total of 210 (-4), Alfieri finished in second place, one stroke ahead of Cote. 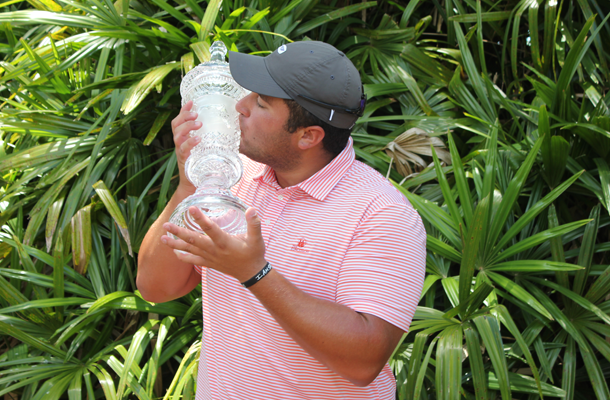 Matt Cote finished the Championship at even par with two birdies and two bogies on the back nine for a 211 (-3) total. Cote fell to tied for third place with Michael DeMorat. DeMorat had a come from behind final round of 66 to tie Cote. Joe Stepnes played steady golf prior to the final day posting two even par rounds of 71-72. Stepnes played tough in the final round with six birdies in the first eleven holes to move to tied for the lead through the 14th hole. On the 16th hole Stepnes hit a ball in the water and struggled to finish tied for fifth place at 213 (-1). Lench never lost sight of the lead and finished the Championship with a wire-to-wire victory after a 69 and 208 (-6) final. Gabe is the third player since 1955 to win the Florida Open and Amateur Championship in the same year. Some facts about Lench, he failed to qualify for the Florida Open the day before the Amateur Championship. After winning the Amateur Championship three weeks prior to the Open Championship, Lench became exempt to the Open where he earned his win.

Michael Finster carded rounds of 74-68-71 to finish tied for fifth place after making the cut at the U.S. Senior Open Championship. Devon Hopkins, Alexander Vogelsong, and Will Wiseman tied Stepnes and Finster for fifth place at 213 (-1). The most experienced player in the Championship at the age of 69, Jerry Tucker, played impressive golf with three consistent rounds of 73 to finish tied for 31st 219 (+5). The Florida Open Championship will be played at The Hammock Dunes Club in 2019 where Lench will defend his victory.

The FSGA is contributing money that will be paid at local qualifying sites in appreciation of the Golf Professionals of Florida!

Innisbrook Resort & Golf Club plays host to the 72nd Florida Open in Palm Harbor. The Florida Open is open to PGA golf professionals, amateur golfers, and other professional golfers who meet the eligibility requirements listed below. The Florida Open has a rich history that dates back to 1942 and includes notable champions, such as Bob Murphy, Gary Koch, Charles Owens, Bruce Fleisher, John Huston, Dudley Hart, and Bart Bryant among others.  Click here to read more about the historic event and its past Champions.

Professionals and Amateurs can qualify for the Championship through local qualifying.  Exemptions are available through State Amateur Championships & PGA Section Events. For a look at the 2017 Championship click here. 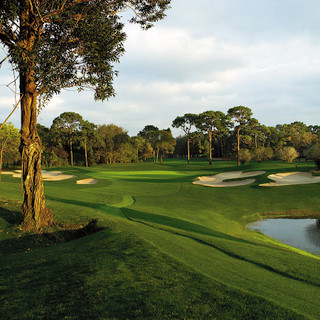 Entries for qualifying are accepted on a first-come, first-served basis until the site field is full. Entries are then placed on an alternates list in order of receipt and contacted if, and when, a spot becomes available.

Those individuals who advance to the Championship through qualifying must pre-register and remit the appropriate Championship Fee (See Above) online at www.fsga.org under the "My Account" section, which can be located in the top right hand corner of the web-page.  Payment must be received by Friday July 6th by 3:30 pm or the individual will be withdrawn from the Championship.  Championship fee includes competitive round lunches, golf, cart fees and range balls, player's badge, tee gift. A purse for professionals is being introduced at the local qualifiers. The average approximate purse is $1,000 and is determined by the amount of professionals who begin (tee off) at each qualifier. Click here to view the payout schedule.

Players may submit one entry for the Florida Open and choose the site at which they will attempt to qualify.  However, if any site requires adjustment (including, but not limited to, the receipt of more entries than can be accommodated), players will be transferred to another site based on their preference listed on the entry application and date of receipt of entry application (i.e. later applicants will be subject to transfer)

The golf course will be set-up at approximately 7,000 yards. J.C. Deacon won the 71st Florida Open with a 13-under par total of 203  and won by one shot over fellow professional Matt Borchert. The University of Florida Head Coach walked away with not only the trophy to display in his office in Gainesville, but also a check for $15,000 that was awarded to the top finishing professional.

During qualifying and the Championship proper, each player must use a golf cart which is included in the qualifying and Championship entry fees. Caddies are allowed without restriction (new for 2018). The caddie MUST walk and the player's clubs must remain on the golf cart.

If necessary, there will be a hole-by-hole "sudden death" play-off for Champion. It is the player’s responsibility to be present for any playoff.

You may not make your practice round tee time before qualifying is completed. A list of players will be faxed to the club following the conclusion of qualifying. 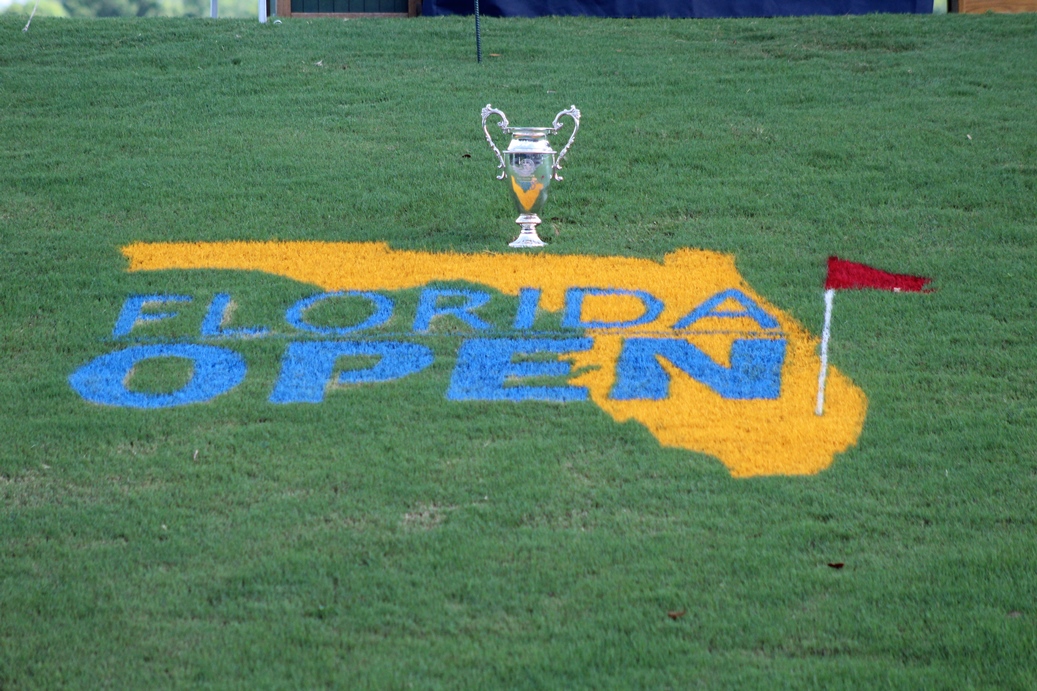 Players in the following categories will be eligible for exemption provided they meet all entry and eligibility requirements:

NOTE: Blank entries will be filed by the FSGA for players who become exempt after the close of entries.

Amateurs finishing in the top five and tied 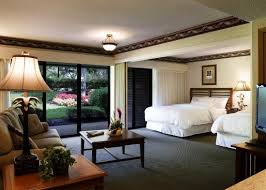 Proper attire for competitors and caddies is required at all times at the golf facility.  Failure to comply may result in withdrawal of entry. By participating in FSGA Events you grant the FSGA and those acting with the FSGA, permission, authority and the permanent rights to use your name or likeness for publicity and promotional purposes. Participants understand that all Media, including film, photographic prints, audio or digital files are the exclusive property of the FSGA. Participants in FSGA events waive their rights to inspect or approve all media produced by the FSGA and those acting on the FSGA's behalf. Participants waive their permanent rights to compensation for use of their name and likeness by the FSGA.