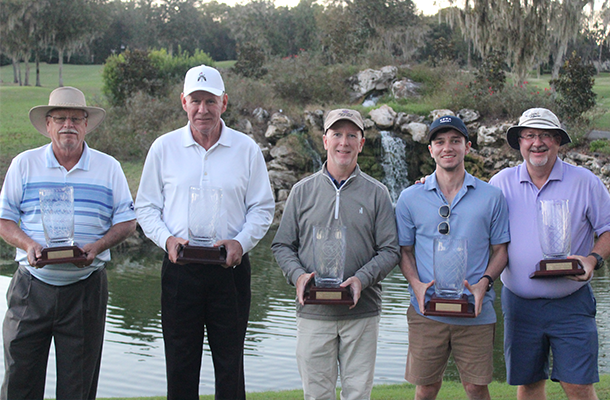 OCALA, Fla. – After having Saturday cancelled due to weather, four teams took home wins at the inaugural Men's Net Two-Man Shoot-Out on Sunday at the Country Club of Ocala. Eric and Eric Hutchison took home the win in the Under 50 division, Scott Collins and Gene Weaver won the 50-59 division. Robert Rosenberger and Ken O'Dea were victorious in the 60-69 division, and to round it out, Brian Carroll and Tom Weber won the 70 & Over division.

The Hutchison duo used rounds of 67-65 to take home the Under 50 victory at 12-under 132. In the first round's Scramble, the duo finished with a 67 (-5) and sat two shots behind the team of Doherty & Vukovich. Players competed in a four-ball format in the afternoon, and the Hutchison duo caught fire by coming in with a final-round 65 (-8) to claim a five shot victory.

Patrick Brisley and Andy Weber took second place with a 7-under 137, while Dennis Doherty and Brian Vukovich earned third at 7-under 137.

Collins and Weaver picked up the win in the 50-59 division with a 12-under 132. They saw themselves in a three way tie for the lead at the end of the morning round, by shooting a score of 68 (-4). The duo followed it up and fired a final-round of 64 (-8) in the afternoon to take home the win by a margin of three shots.

Dan Perez and Jerry Fleming finished second at 9-under 135, and Dr. Howard Van Nostrand and Robert DeLosh took third at 5-under 139. 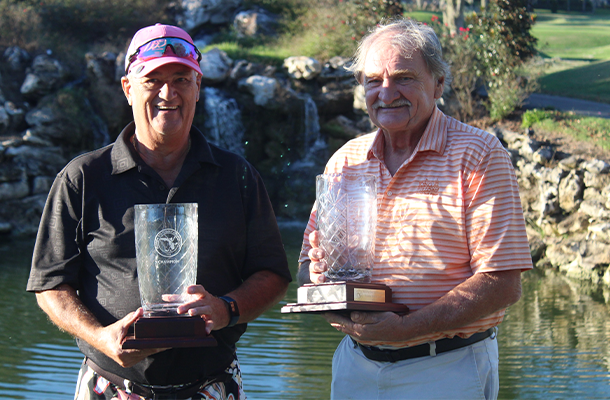 Robert Rosenberger and Ken O'Dea captured the win in 60-69 division, finishing the weekend at 9-under 135. Although the duo put together a solid first round of 66 (-6), they saw themselves staring up at the leaderboard and sat four shots behind. Throughout the afternoon, they were able to chip away at the lead and finish with a second round score of 69 (-3), in order to win the tie-breaker, and ultimately come out on top.

Gary Morris and Michael DiFrancesco finished second at 9-under 135, while David Lake and John DuBois took third at 7-under 137.

Carroll and Weber earned the win in the 70 & Over division with a 3-under 141. The pair began the day with a 2-under 70 in the first round, before carding a 1-under 71 in the final round to take home the win. 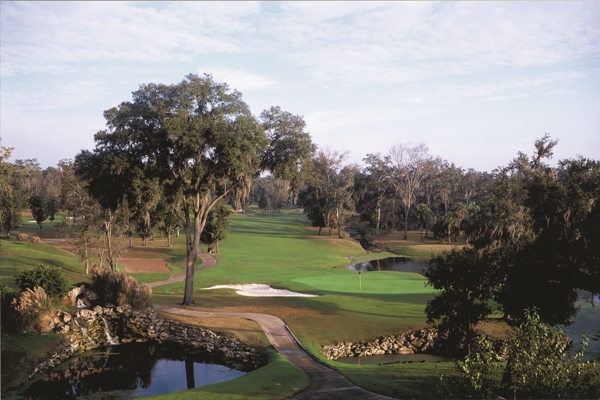 Entries will be processed if players have completed 2 One-Day events in the 2021 season, and will be first come first serve.

$250 *Price per team* - Entry fee includes both competitive rounds, cart fees, tee gift, and gift certificate prizes. Late entries will be accepted subject to a $10 late entry fee should the entrant gain acceptance into the field.

**No pairing requests will be honored for this Championship**

Practice rounds are available one week prior to the Championship on a space available basis.  The price for a practice round is $40 plus tax. Please call 352-237-6644 to schedule your practice round. The proper place to practice your golf swing is on the driving range, hitting multiple shots on the course is unacceptable.

Carts are included for all competitive rounds.  Players are responsible for practice round fees.