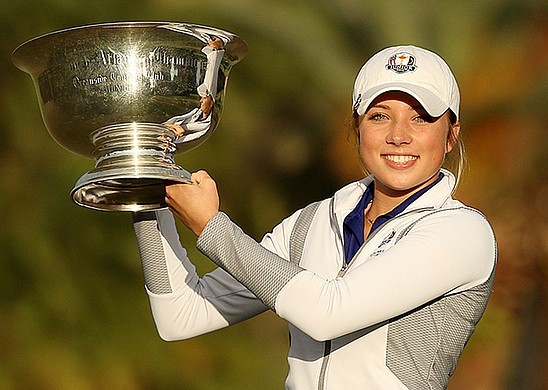 2015 Girls' Junior Player of the Year

With an impressive playing resume that seems to never end, Sierra Brooks, of Sorrento, has become a household name in the women's amateur golf circuit. Over the past year Brooks has earned seven top 10 finishes around the country allowing her to capture the 2015 Girls' Junior Player of the Year with 21,100 points! Not only is Sierra ranked third in both the World Amateur Golf Rankings and Polo Junior Golf Rankings, she is also ranked fifth in the Golfweek Women's Amateur rankings. Her talent has sent her around the world by earning spots on Team USA's Junior Solheim Cup, Trans-Pacific Golf Match, Junior Ryder Cup, Toyota Junior World Cup  and The Junior Open Championship. In October, Brooks won the Class 1A States, in November, she won the Polo Golf Junior Classic, in January, she claimed first at the Women's Southern Atlantic Amateur, in April she won the AJGA Taylormade Championship, and earlier this month she brought home the trophy at the 100th edition of the Women's Southern Golf Association Amateur. As if this list of accomplishments doesn't impress you, Sierra finished runner-up in the 2015 U.S. Women's Amateur Championship.