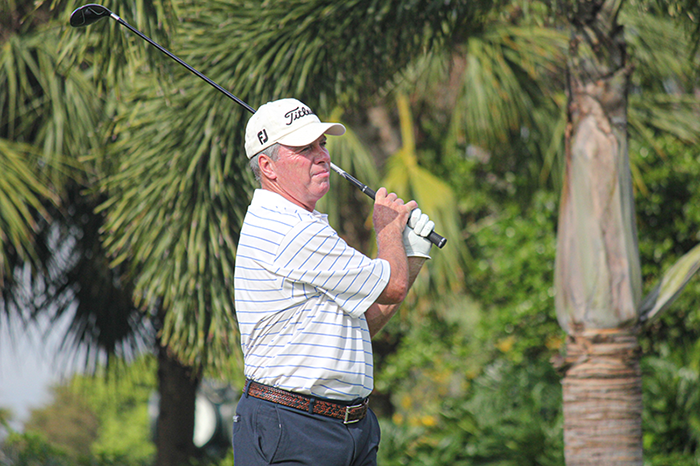 LaCrosse has been competing in FSGA events since 1990, building an extensive golf resume over the past 30 years. He has captured 14 FSGA championships and has been named a FSGA Player of the Year four times on his way to this honor.

“When they called to tell me, I couldn’t believe it. I’d never thought about it, so it means a lot,” LaCrosse said. “To do this with Rick, it couldn’t be more fitting.”

Growing up in Tampa, LaCrosse first picked up golf in sixth grade, when he joined the junior golf program at Carrollwood. At the urging of a friend, LaCrosse joined the golf team at Hillsborough Junior College, before getting a scholarship to play at the University of South Florida for two seasons, winning the State Intercollegiate Tournament.

After graduating from USF in 1975, he took a step back from golf to focus on work, but the competitive spirit never left him. LaCrosse got a taste of high-level competition again in 1989, when he qualified for the U.S. Mid-Amateur Championship. From then on out, his goal was to practice and play more to compete in more top-tier events.

Two years later, LaCrosse captured his biggest win at the 1992 Amateur Championship. He considers this a big step in his amateur career because of who he defeated to win the title.

“When you play the game, you want to beat the best. The best was Rick,” LaCrosse said.

LaCrosse was paired with Woulfe in the final round. The field faced thunderstorms and high winds that week and the championship was shortened to 36 holes, but it was LaCrosse who prevailed.

The Tampa native added victories at the 1995 Mid-Amateur Championship, 1996 Amateur Match Play Championship and was named the FSGA Amateur Player of the Year three times, along with competing in over 15 USGA championships.

Two memories stand out the most for LaCrosse. One was winning the Parent-Child Championship, with his daughter Cindy in 1997. The other came in 1999 at the Florida Cup, when he and Joe Alfieri were competing in a Four-Ball match against Woulfe and Mark Leetzow. Alfieri holed out on the seventh hole, on their way to a 2-and-1 victory over Woulfe and Leetzow.