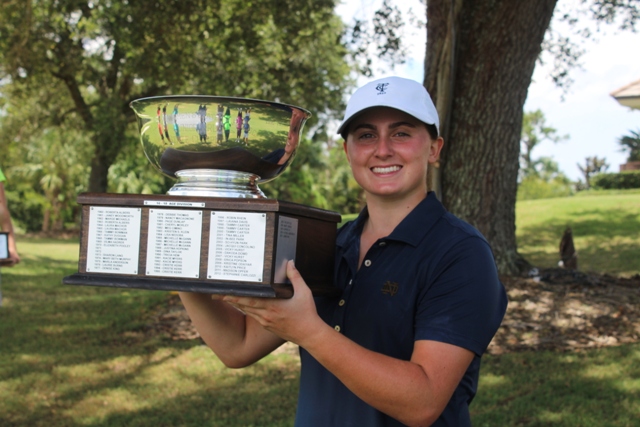 2018 Girls' Junior Player of the Year

Schiavone was honored with the Girls' Junior Player of the Year award following her 2018 season that saw four wins and seven top-15 finishes on the Florida Junior Tour. Her first FSGA Championship victory of the season came at the Women’s Four-Ball Championship. Schiavone and her partner, Ariel Yu, finished nine strokes ahead of runner-ups Kayla Holden and Lauren Davenport.

The Jacksonville native secured her first individual FSGA Championship at Bent Pine Golf Club, where she won the Girls’ Junior Amateur Championship. Schiavone carded the only under-par round of the championship with a three-under 213. She won the 2018 Junior Amateur Match Play in July at The Forest Country Club, defeating runner-up Skylee Shin, 3 and 2.

Schiavone and Izzy M. Pellot teamed up to advance to the quarterfinals of the U.S. Women’s Amateur Four-Ball Championship earlier this year.

In FJT events, Schiavone captured one win and two other top-10 finishes. She earned the win at River Strand Golf & Country Club, posting a one-over 145. Her other two best finishes came at Cimarrone Golf Club, where she finished fifth, and the Ocala Golf Club, where she tied for sixth place.