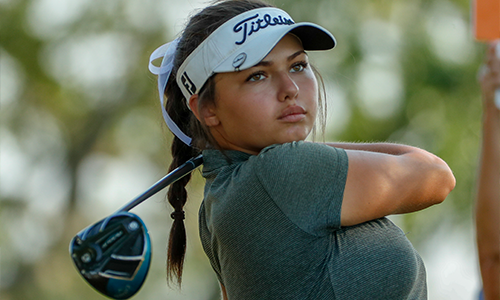 “The FSGA is one of the best golf organizations in the world, there are many great players here. To win this award is a huge honor,” Pano said.

She had a strong start to the season, winning the Ione Jones/Doherty Championship in January, while also earning a runner-up finish at the Women's South Atlantic Amateur Golf Championship the same month.

The Lake Worth native added three more wins this season, capturing the win at the Dustin Johnson World Junior Championship and Scott Robertson Memorial, as well as winning the Rolex Girls Junior Championship, one of the prominent invitationals on the American Junior Golf Association schedule.

Pano made a splash in USGA Championships this season, advancing to match play in three championships. She shared medalist honors with Jiarui Jin at the U.S. Women’s Amateur Championship, while advancing to the Round of 16 at Old Waverly Golf Club.

The 14-year-old advanced through a playoff to qualify for her first U.S. Women’s Open Championship. She 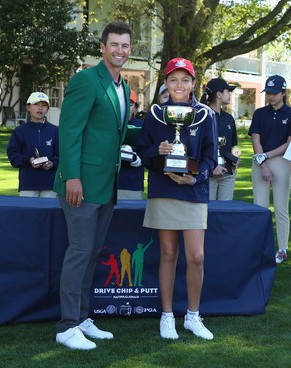 was the youngest competitor in the 156-player field at the Country Club of Charleston in South Carolina.

She and her partner, Amari Avery, were semifinalists at the U.S. Women’s Amateur Four-Ball Championship in April, falling to the eventual champions, Meghan Furtney and Erica Shepard, 4 and 3.

Pano, who is ranked 44th in the World Amateur Golf Rankings, was a part of history in April, when she competed in the inaugural Augusta National Women’s Amateur Championship in Augusta, Ga.

“I had a good year with several wins and top finishes, but by far the highlight of my year was playing in the Augusta National Women’s Amateur, a very historic moment in women’s golf,” Pano said.

Along with her success on the amateur circuit, Pano also teed it up in six professional events this season. She finished eighth in the Symetra Tour’s SKYiGOLF Championship in March, after holding a share of the lead heading into the final round.

Co-Girls' Junior Player of the Year Alexa Pano, of Lake Worth, had probably the most impressive year ever from someone at her age. The majority of Alexa's stellar season came as an eleven year old. She started her season with her partner and fellow Girls' Junior Player of the Year, Alyssa Lamoureux, competing in the U.S. Women's Amateur Four-Ball Championship at Streamsong Resort. The two would make match play, but fall in the Round of 32. She has competed in ten FJT events this season and she has won five of them. Most notably of the five was a win in the 16-18 age division at Old Corkscrew GC. Alexa finished 2nd in both the Girls' Junior Amateur and Girls' Junior Amateur Match Play Championships. The cornerstone of Alexa's year and quite possibly her young career came on April 3rd when she won the 10-11 age division at the Drive, Chip, and Putt competition at Augusta National Golf Club. This was Alexa's second trip to Augusta to compete in the Drive, Chip, and Putt Championship. Alexa started the month of August playing in the U.S. Women's Amateur Championship at Rolling Green Golf Club in Springfield, PA. She followed that up with her fourth title in five years at the U.S. Kids Golf World Championship. On August 20th, Alexa turned twelve. Eleven days later she won the AJGA Philadelphia Junior Championship. Alexa is now the second youngest AJGA champion in their long and storied history.