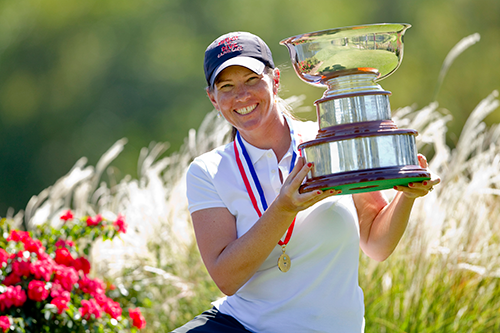 TAMPA, Fla. – Four-time U.S. Women’s Mid-Amateur champion and eight-time FSGA Women’s Amateur Player of the Year, Meghan Stasi has been selected as the 2021 FSGA Hall of Fame inductee. Stasi will be the youngest individual inducted into the FSGA Hall of Fame in the Association’s history at just forty-two years old.

“There’s so many incredible players in the state of Florida, and I’ve been fortunate to meet so many of them,” Stasi said. “It’s just a real honor to be a part of an organization that cares so much. There’s so many deserving players, so it was a complete shock.”

The 17-time FSGA champion will be inducted into the Hall of Fame at the FSGA’s Annual Meeting and Banquet in Boynton Beach at the Club at Quail Ridge in November. The Annual Banquet celebrates the best players in the state, tournament volunteers, board members and many other important individuals involved in the game of golf in Florida.

Stasi has become a household name in the world of women’s amateur golf over the past decade. She has amassed four USGA championship wins, 17 state championship victories and is an eight-time FSGA Women’s Amateur Player of the Year.

The New Jersey native started playing golf at eight years old, and it was her parents and grandparents who introduced her to the game. Her parents were great athletes in their own right, her mom lettering in three sports in college and her dad playing baseball at Xavier University.

Stasi recalls that her fondest childhood golf memory came not long after she was introduced to the game, when her grandfather caddied for her in a three-hole event up in Somers Point, New Jersey. From there, her love for the game quickly grew. 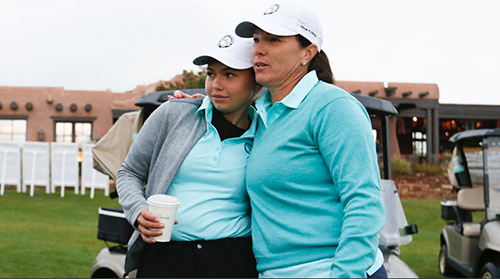 But it was not until college, that she would turn her attention solely to golf.

A multi-sport athlete in high school, Stasi chose to head south for college and play collegiate golf at Tulane University in New Orleans, Louisiana. She put together a standout career for the Green Wave, being named a two-time All-Conference USA honoree and helping to lead Tulane to its first NCAA Regional berth.

Following graduation, Stasi became an assistant coach at the University of Mississippi, as she pursued her master’s degree, with plans to turn professional.

But those plans took a turn when she was offered the head coaching position at Ole Miss.

After serving as an assistant for a year, Stasi was promoted to Rebels head women’s golf coach. At the time, this made her the youngest Division I head coach in any sport at the age of 23.

Stasi was at the helm for six seasons in Oxford, leading Ole Miss to two NCAA Tournament appearances and a team victory in just her second tournament as a collegiate head coach. She also coached Laura Evans to the best NCAA Tournament finish in school history, at the time.

It was while coaching the Rebels that Stasi picked up her first win at the 2006 U.S. Women’s Mid-Amateur Championship. Stasi’s players cheered her on as she raised the trophy at Old Waverly Golf Club, just 90 miles away from Oxford. 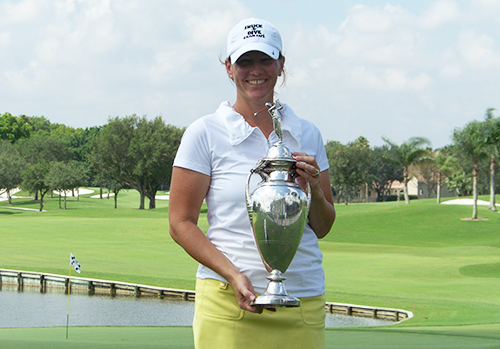 She became just the third player in USGA history to win back-to-back U.S. Women’s Mid-Amateur Championships, when she captured the victory in 2007 at Desert Forest Golf Club in Arizona.

Not long after getting the nod for the Curtis Cup, Stasi made the move down to Florida. Since moving to the Sunshine State, she has compiled a stellar resume with the FSGA. She is a two-time Florida Women’s Amateur champion, a five-time Florida Women’s Mid-Amateur champion and has been named the FSGA Women’s Amateur Player of the Year eight times.

“It’s just really special to be able to play a sport, and at all levels, it doesn’t matter who it is, everyone just loves the game,” Stasi said.

In addition to her achievements with the USGA and the FSGA, Stasi is a seven-time Philadelphia Women’s Amateur champion, winning seven-straight titles.

“This is just an incredible way to continue to represent the FSGA for life,” Stasi said.

Formed in 2005, the FSGA Hall of Fame recognizes exceptional individuals for their contributions to Florida golf. The Hall of Fame is open to great players, dedicated volunteers, sportswriters, architects, and other individuals who have had a profound effect on the game of golf in Florida.