Rules of Golf - Our Rulings at Augusta National

We drove up to Augusta a couple days before the first round and stayed in cottages at the Champions Retreat Golf Club, which hosted rounds one and two of the tournament. The members and staff at both Champions Retreat and Augusta National could not have been more prepared, professional, welcoming, and excited to host the best amateur female golfers in the world.

During rounds one and two at Champions Retreat Golf Club each of us were assigned as a referee to a specific group. As a referee, you walk with the group trying your best to stay out of the way and blend in with the spectators, monitor pace of play and assist with any rulings or questions from the players.

The players were so talented that they hardly needed help from the referees; however, we did have some rulings during the first two rounds at Champions Retreat. Two players in my group both hit their approach shots in the same greenside bunker and the balls came to rest a few inches apart. A player waived me over and after the player confirmed that the ball is interfering with her shot, I instructed the other player to mark and lift her ball without cleaning it. The player farther away from the hole played first and then the other player replaced her ball. Her lie was not altered, but if it were, she would have restored it since she was in the bunker.

Another ruling I was involved with happened on the 4th hole during the second round. A player in my group hit her approach shot right of the green and the ball came to rest in a tightly mowed chipping area below the green. The player chunked her chip shot and the ball made it near the top of the hill and started rolling back towards the player. When the ball was about four feet from the divot she just made, and it was clear the ball was rolling towards the divot, she stepped on the divot, removed her foot, and the ball slowly rolled over the divot and came to rest about one foot behind it. The act of altering conditions of the ground while her ball was in motion towards it is a breach of Rule 11.3. After she finished the hole I spoke to her and her marker and informed them that she receives a two-stroke penalty (the general penalty) on that hole. The player accepted the news of the penalty professionally and completed her round and unfortunately, missed the cut by five strokes.

The other rulings we helped players with were simple rulings like helping a player drop from an embedded ball, a cart path and penalty areas.

The Rules Officials had a rules meeting at Augusta National Golf Club and received our assignments for the final round. Jack was assigned left of the 2nd fairway, Jenna was left of the 11th fairway and I was behind the 8th green. We then had several hours to tour the course before being transported back to our cottages. The experience of walking the course while the ladies were playing their practice rounds with no patrons was a very unique and special experience. 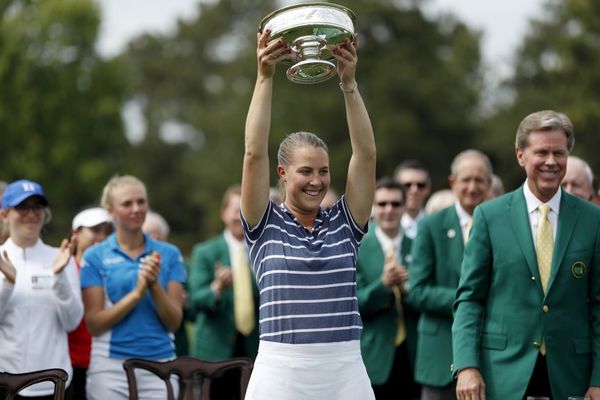 When the gates opened to the patrons before the final round, the course quickly filled with tens of thousands of eager golf fans supporting and cheering on the women. Roars after great shots spread across the grounds similar to those heard during the Masters.

The only ruling I had at the 8th green was when two ladies where just short of the par-5 green in two shots. The first lady chipped up to approximately four feet. The second player then chipped and her ball struck the other player’s ball at rest on the putting green moving it about five inches. The player asked me if she should move it back and I advised her to estimate the location where the ball was before it were moved and replace it.

After the last pairing group passed our assigned locations, we retreated to the clubhouse and watched the leaders play the back nine before returning to Tampa.

If you didn’t watch the telecast, you missed out! The golf was phenomenal and the back nine was very exciting. The eventual champion, Jennifer Kupcho, was two strokes behind Maria Fassi in the 13th fairway and then Kupcho would go on to eagle the 13th and birdie the 15th, 16th and 18th holes to win by four shots! See more on the tournament here.