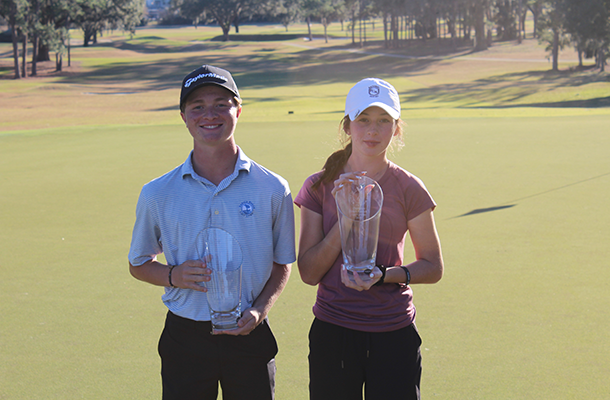 GAINESVILLE, Fla. – Many of the best junior golfers in the state of Florida made the trip to the par-70 Mark Bostick Golf Course at the University of Florida in Gainesville this weekend for the first FJT event of 2023. Players competing in the 54-hole tournament were met with adversity early on as cold air and significant winds impacted play during the first round on Saturday. While frost delayed play on Sunday and Monday the weather eventually improved, as did the scores of the golfers. Monday also presented new challenges as competitors played in foursomes and began the round in a shotgun format. Ultimately, after three rounds of play, Bryson Hughes and Jolie Pastorick emerged victorious.

After 18 holes of play, it was clear that the cold weather and difficult conditions had an effect on the golfers scores, as just one player finished under par. Hughes, of St. Johns, turned in a score of 35-34—69, which included a stretch of three birdies in seven holes during the middle of his round. This was good enough to propel Hughes to a one-shot lead over St. Augustine native, Joey Hage (36-34—70), who was followed on the leaderboard by two-time FJT winner and Jupiter native, Tristan Wieland (37-34—71).

Following a brief frost delay, players returned to Mark Bostick on Sunday and were welcomed with a positive change in the weather. Less intense winds and warmer air paved the way for better scores as six players completed the second round under par. Headlining this group was Hughes, the round-one leader, who fired off a tournament-low score of 33-32—65. The Creekside High School attendee played bogey-free golf until the par-3 15th, ultimately rattling off six birdies on the day.

After the round, when asked why he had been able to separate himself from the field, Hughes gave a lot of credit to his spectacular iron play and ability to leave the ball below the hole on the notoriously quick greens at Mark Bostick . Hage (38-30—68) kept his spot behind Hughes on the leaderboard thanks to a spectacular back nine, highlighted by an eagle on the par-4 10th. Defending champion, Miles Russell (35-33—68), of Jacksonville Beach, moved up to third place after 36 holes.

On Monday, despite beginning the final round with a four-shot lead, Hughes’ advantage quickly dwindled to just two strokes after he bogeyed the par-4 first and Hage birdied the par-3 second. The pair would trade birdies and bogies for the remainder of the front nine as the St. John’s native’s lead was able to build his lead back to three strokes after nine holes. Hughes (36-36—72) would go on to play the back nine at 1-over to capture his first FJT victory by two strokes. Wieland (34-32—66) used a spectacular final round to finish in second place, while Russell (34-35—69) finished in third.

At the end of the first round, two golfers shared the 18-hole lead with scores of 5-over 75. Hannah Hall (40-35—75), of Rockledge, got off to a rocky start as she double-bogeyed the par-4 fourth and ninth holes. Another bogey on the par-4 10th would set the Rockledge native back even further. However, Hall was able to regain complete control of her round, finishing the last eight holes with a score of 1-under par. Sahana Chockshi (37-38—75), of Jacksonville, ended round one as the other co-leader. The Jacksonville native utilized a more balanced round (three bogeys on the front and back nine) to share a two-shot lead over four golfers tied for third.

In round two, Hall (36-36—72), a one-time FJT winner and Viera High School attendee, continued to impress. Her steady play throughout the day, highlighted by birdies on the 12th and 15th holes, allowed her to build a four-shot lead heading into the final round. Pastorick (39-35—74), of Sarasota, jumped into second place thanks to a stretch of three straight birdies on holes two, three and four. This brought the Sarasota native to within one shot of the leader, but a bogey on the par-4 fifth and double bogey on the par-5 seventh would increase her deficit back to four strokes. Krishny Elwin (39-36—75), of Orlando, finished Sunday in third.

The leaders began their final round on Monday on the par-4 10th, with Hall keeping her four-shot lead through the first two holes. However, this lead would not last long as Pastorick (37-35—72) would birdie the par-5 12th and take advantage of consistent play for the remainder of the front nine to share the lead with Hall through nine holes. Despite experiencing some struggles on the back nine, the Sarasota native was able to hold off her competition to claim her first FJT win by four strokes. Ana Boone (38-35—73), Hall (41-39—80), Elwin (37-38—75), and Miranda Lu (36-38—74) would all finish in a tie for second.