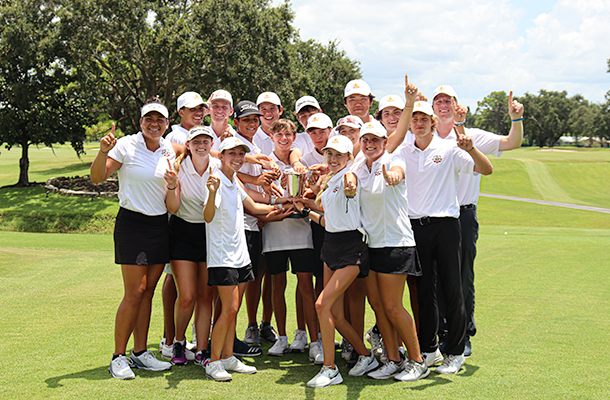 SARASOTA, Fla. – Coming down to the final match, the South is back on top at the Junior Florida Cup. South Florida staged an epic comeback during the two-day championship, raising the cup with a 16.5-15.5 victory on Tuesday at Sara Bay Country Club.

The championship began on Monday morning with eight four-ball matches. The North came out strong, earning seven points in the morning, while the South took one.

Katelyn Huber and Junyuan Zhang captured a decisive 5-and-4 win for the North, winning four of five holes on the back nine to secure the victory. Shawn Coulotff and Clipper Salmon picked up a 3-and-2 win for the North, while Arenui Faana and Sabree Lefebvre also added a point for the South with a 3-and-2 victory.

Joshua Prichett and James Bradley won the final hole to defeat Matvey Golovanov and James Hassell, 2 up, to add another point for the North. Jaxon Brown and Parker Severs captured the lone point for the South in the morning, winning 5 and 3.

Monday afternoon’s foursome matches saw the South team add some much-needed points, earning 4.5 points in the afternoon. Lorenzo Rodriguez and Kayla Bryant captured a dominating 7-and-6 win to add a point for the South team. South’s Brown and William Jun took the lead on the second hole and never let it go, winning 3 and 2.

On the North side, Brody Stevenson and Boyi (Barry) Zhang won four holes on the front side before winning 5 and 4 against Tristan Wieland and Ibby Carrington. Chase Carroll and Faana won two-straight holes to win 4 and 3 to add another point for the North.

Ava Zeng and Coultoff won, 3 and 1, for the North, with Zeng rolling in a long putt from off the green to secure the victory over Golovanov and Moman. After grabbing 3.5 points in the afternoon, the North headed into Tuesday’s final round with a 10.5-5.5 lead over the South, needing 5.5 points to retain the Junior Florida Cup.

In Tuesday's singles matches, Bryant put an early point on the board for the North, defeating Madison Moman, 7 and 6, winning the final three holes on the back side. North’s Coultoff added his third victory of the week, defeating Ibby Carrington, 2 and 1, while Jake Manelas won 4 and 3 against James Bradley to add the first point of the South.

The South team rattled off seven more big wins, with only one of those matches making it to the 18th hole, to sit tied with the North at 15-15. Sofia Cherif Essakali had a comeback against Zeng, winning three of the final four holes to get a big ½ point for the South team.

Izzy Pellot fought back against Chloe Kovelesky, winning the 17th hole to tie the match back up. The pair tied the match on the 18th to bring the score to 15.5.-15.5 with one match left on the course.

The last match of the day between Carroll and Golovanov proved to be the deciding match. They went back and forth for most of the day, but Golovanov took the lead on the 11th and held onto it for the rest of the day. He clenched the victory for the South team on the 17th hole.

Four players finished the week undefeated: Bryant (South), Coultoff (North), Brown (South) and Zhang (North). The South team picked up 11 points in the singles to take home the victory, while the North ended with 5.