TAMPA, Fla. - Every year the Florida Junior Tour sends Junior players off to take the next step in their golf career by playing at the collegiate level. Over the years, FJT alumni have racked up impressive collegiate careers at universities across the country. The 2021-2022 season was no different across both women's and men's collegiate golf.

Meet some of the former FJT and FSGA Champions who completed tremendous seasons at their respective universities. 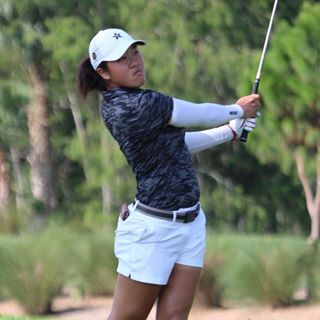 “I just focused on doing my job,” Kim said. “I spent countless hours with my team, at workouts, and on the course.”

Those hours certainly paid dividends as the senior from St. Augustine recorded five top-six indivisual finishes throughout the season.  Kim really rounded into form at the end of the season with a tied-for-sixth finish at the SEC Championship and a tied-for-fourth finish in the Franklin Region to help send the Commodores to the National Championship.

The 2018 Florida Women’s Amateur semifinalist, Mindy Herrick wrapped up her fifth and final year at the University of North Florida. The Gainesville native continued her trend of improving her stroke average every year in college, finishing with a 73.18 average for the 2021-2022 season. Herrick attributed the success to course management and knowing her game.

“Some of my teammates can take more aggressive lines than I can,” Herrick said. “I rely on knowing that my game will work for me and not comparing myself to others”.

A class of 2017 FSGA Scholarship recipient, Herrick felt she had a responsibility in her final season as a UNF Osprey to be a leader for the team.

“I wanted to lead by example and set the example.”

The rest of the team seemed to take to Mindy’s lead as UNF had one of the best seasons they have had as a program. Notching two wins in the 2021-22 season, including the Atlantic Sun Conference Championship in April.

“I’ve been wanting that ring for 5 years,” Herrick said as she led the way for the UNF team with a fourth-place individual finish.

That team aspect is something that Herrick really enjoyed while at the University of North Florida, playing as a team adds more fun, motivation and drive to the sport for Herrick.

Following the spring semester, Herrick will be working at the UNF Taylor Leadership Institute while finishing her graduate degree. Her passion for golf continues as she is running junior golf camps at her home course.

After an impressive career on the Florida Junior Tour, Chloe Schiavone traveled up to the University of Notre Dame to continue her golf career. Unfortunately, a wrist injury forced her to redshirt her first year in South Bend. During that time, Schiavone took the time to get acclimated with her academics which made her sophomore year a lot smoother when she began traveling with the team.

Schiavone traveled to every event in her sophomore season for the Fighting Irish. It did not take long before the Jacksonville native became accustomed to playing at the next level, recording a top-10 finish in her second start of her career at the Badger Invitational.

She continued her good play recording top 10s in three of the next four events, including a fourth- place finish at the Westbrook Invitational with three-straight rounds of 70. The consistency she showed in that event is something she looks to carry forward into next year.

The key to that consistency is going to be her putting according to Schiavone, improving her putting will help when her ball stricking isn’t the best. After a very good first full season in college, Chloe Schiavone hopes to build upon that going forward.

“I just want to go into every tournament with a great attitude,” Schiavone said.

The FJT winner found his groove as the team moved to the postseason. Highlighted by a second-round 63, Chartier won the Southern Conference Championship as an individual. The championship was the first event that Chartier had played at the same golf course as the previous year. With the requisite knowledge going in, he felt it was a big advantage in being able to manage his game around a course he had seen before.

The Gulf Coast High School graduate took that confidence with him to NCAA Regionals in Columbus, Ohio where he finished fourth and was a large reason the ETSU Buccaneers were able to book a repeat trip to the NCAA Championship.

The key to his growth as a player this year was knowing my game, Chartier said. It was not about tuning up a big weakness, but about being more mature which came a lot from the guidance of his head coach, Jake Amos.

After four years at East Tennessee State University, Chartier’s passion and love for the game grew throughout his college experience because of the environment that his coaches and teammates have created.

“If you enjoy the golf and want to get better it is all there for you,” Chartier said.

The Ole Miss rebels opened up their spring semester in Puerto Rico and Schell picked up right where he left off in the fall. The St. Augustine native finished the tournament with rounds of 66-65 to tie for fourth, his best career finish.

“The key was playing each shot by shot and recognizing when I am out of position and getting it back in position,” Schell said.

Schell is known for being one of the longest hitters in college, so to recognize he was going to have plenty of chances and to control the times he gets in trouble was huge for his game.

The great play continued throughout the latter half of the year with top-25 finishes in two of the final three events of the year. Regrettably, an illness kept Schell from playing in the postseason for the Ole Miss Rebels but Schell is ready to build off the confidence he gained from the 2021-2022 season this summer and as he heads back to Oxford in the fall.

Coming into the season, Jackson Suber was one of the names to watch around the country in college golf and the senior did not disappoint. In the second event of the year, Suber took home the individual victory as he lead the Ole Miss Rebels to a team victory at the White Sands Bahamas Invitational.

That victory led Suber to move to the top of the GolfStat rankings, being the No. 1 player in college golf entering the spring season. Suber’s key entering the latter half of the year was “trusting my game plans and processes”, game plans he and Ole Miss Coach Chris Malloy had worked hard to create.

Those game plans led to two more victories for the Tampa native, including the NCAA Regional in Norman, Oklahoma. With rounds of 70-68-67, Suber became the first Rebel to win an NCAA Regional in school history. Based on his performance throughout the season Suber was named a 2021-2022 All-SEC First Team member for the second-straight year.

At the end of the year, Suber was ninth on the PGA Tour University’s Class of 2022 rankings. By finishing in the top 15, the FJT alum earned membership on the PGA Tour Latinoamérica and PGA Tour Canada, as well as being exempt into Second Stage of Korn Ferry Tour Qualifying School.

“From FJTs to college now to professional golf, my goal is to keep improving over time,” Suber said. “In the big picture that will help me end up where I need to be.”

Suber will look to follow in the footsteps of former Ole Miss Rebel and current Korn Ferry Tour member Braden Thornberry as he begins his professional career this summer.

As a redshirt sophomore, Sam Nicholson was a mainstay in the University of South Florida lineup. Playing in all but one tournament, the competition experience was incredibly important for the Atlantic Beach native.

“I think the biggest key to taking leaps in college golf for me and almost everyone is just experience,” Nicholson said. “The gap between junior golf and college golf is such a big one that I think the more tournament rounds you play the more comfortable you get.”

The accumulation of tournament rounds certainly proved to benefit Nicholson’s game as he got better as the season went on. Nicholson finished 21st in the American Athletic Conference Championship as he helped his team earn a conference championship victory. The USF Bulls and Nicholson continued that great play as they entered into the NCAA Regional in Palm Beach Gardens at PGA National’s Champion Course.

Through the first round, Nicholson led the event after an opening round 4-under 68.  He followed that up with a 1-under 71 to put the Bulls in a place to qualify for the National Championship.

On a tough day at PGA National, Nicholson managed a 74 to finish in a tie for sixth individually and lead his team to the fourth of five spots to the NCAA Championship.

“To peak at the right time and play well there was really big for my confidence and something I will carry with me for the remainder of my college career,” Nicholson said.