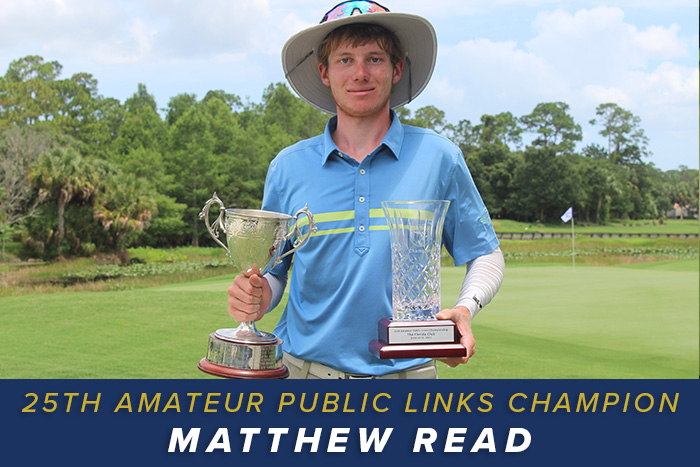 Conditions were ideal for scoring during round one, on Friday, leading to 15 under-par rounds to start the 25th Amateur Public Links Championship. Dustin Dingus got the scoring under way with birdies on holes five through eight to get to 4-under for the day. However, a double bogey on hole 15 gave him a 3-under 69 finish after his first time around The Florida Club.

The rounds of the day came from a trio of young players. Frankie Harris, Genki Sadato, and Matthew Read were all able to navigate Friday’s round with a score of 5-under 67. Harris and Read had bogey-free rounds with five birdies, while Sadato used an eagle on the par-5 fourth to offset his one bogey on the day.

Plenty of players went into moving day on Saturday with eyes on finding their way up the leaderboard. However, overnight co-leader Matthew Read made sure no one gained any ground. The Bradenton native put together a round of 7-under 65 to pull away from the pack with a 12-under total for the Championship.

Frankie Harris would continue to play well in the second round. The current Auburn Tiger held the lead through the turn and a 2-under back nine allowed him to stay within three shots going into the final round. Egor Eroshenko moved up the leaderboard with a 4-under 68 after starting the day 2-over through three holes. Eroshenko put himself in a position to have a chance on Sunday if Read were to stumble as he sat 6-under for the Championship and tied with Genki Sadato for third place.

In the final round, as the leaders were making the turn, Christopher Anderson was finishing a round to remember. Anderson put together 11 birdies in the final round to combat two bogeys and tie the course record of 63 at The Florida Club. The record-tying round vaulted Anderson up the leaderboard 26 spots into a tie for 6th.

Meanwhile, the lead was starting to shrink for overnight leader Matthew Read. A 2-over front nine left him with just a one shot lead over Egor Eroshenko with nine holes left to play. However, trouble found Eroshenko at the par-5 11th. Eroshenko made a double-bogey while Read posted a par to extend his lead. Birdies on 13 and 15 left Matthew Read with a three shot lead with three holes left to play. Two pars and birdie on the final hole secured the two-stroke victory for Read with a final round 71. Despite a birdie on the 18th hole, Harris finished in second after a final round 70, followed by Joseph Latowski in third place four strokes back. A 13-under tournament total of 203 gave Read his first FSGA Championship win!