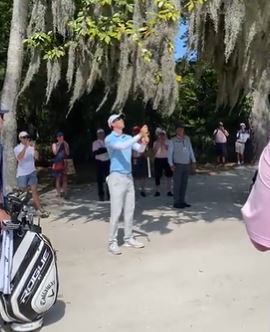 A few weeks ago at the PGA Tour’s RBC Heritage played at Harbour Town Golf Links, Dylan Frittelli played one of the most unusual shots you will ever see on a golf course. He pulled off the unique shot and made par on the hole; until later when a Rules Official told him he must add a two-stroke penalty.

On the sixth hole, Fritelli’s tee shot went into a tree and never made it to the ground. He found his ball suspended about seven feet above the ground in a clump of spanish moss that was hanging from the tree. He took out his driver, gripped the shaft of the club, stood under and behind the ball, held the driver above his head and knocked the ball into the fairway. Fritelli then holed out in two more strokes for a miracle par.

Later, a Rules Official informed Fritelli that must add a two-stroke penalty on the sixth hole standing on or across your line of play, or an extension of that line behind the ball (imagine a croquet style stroke). Rule 10.1c prohibits that type of the stroke.

Click here to view a video of the shot

10.1c. Making Stroke While Standing Across or on Line of Play

For this Rule only, the line of play does not include a reasonable distance on either side.

Exception – There Is No Penalty If Stance Is Taken Accidentally or to Avoid Another Player’s Line of Play.

A note about spanish moss:

When spanish moss is in a tree it is considered to be part of the tree and growing; hence, you must not move it, or remove it, to improve the conditions affecting your stroke.

When spanish moss is on the ground it is consider to be a loose impediment (natural object that is unattached or growing, similar to a twig or leave). You may move spanish moss laying on the ground as long as your ball does not move.