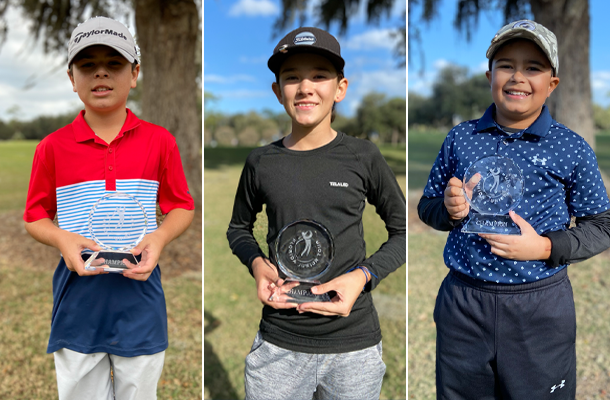 PALM COAST, Fla. – After a rainy start to the day followed by strong wind in the afternoon, three Florida Junior Tour champions were crowned on Sunday at the Palm Harbor Golf Club. Jude Desmond and Marley Pedrique took home the win in the 11-12 division, while Danilo Custer was victorious in the Boys (9-10) division.

It was a close race going into the final round on Sunday, with three players within four shots of Christian Koen, who held the lead with a first-round 72. Jude Desmond fired a 74, while Nolan DeForest shot 75 followed by Vasili Gianakas at 4-over 76.

Desmond started the final round behind Koehn and picked up one shot after the front nine. He made a birdie on the 15th to take the lead heading into the final three holes.  After Koehn’s approach shot came up short on the 18th, Desmond’s par secured a three-shot victory.

The Pompano Beach native played very steady through strong gusty winds earning his third FJT victory. Koehn finished runner-up at 7-over 151, while Jude Johnson moved up four spots to finish tied for third with DeForest with a two-day total of 153.

Marley Pedrique added another win to her already impressive resume.  The Palm Beach Gardens native didn’t finish out of the top two in any event she played in 2021, including a win at the Futures Championship.  Pedrique led by a close margin after shooting an opening round of 74, with Callie Nelson and Sahana Chokshi only two shots back with rounds of 76.

Pedrique got the final round started with an even par front nine, while Nelson made a push on the back nine with birdies on the 14th and 16th. Pedrique was able to hold off the competition in the end with a final round 74 to win by two shots over Nelson.  Tavares shot a final round 75 to move up two spots and finish in third place at 10-over 154.

Danilo Custer, playing in his first FJT, went wire-to-wire to capture victory in the Boys (9-10) Division by three shots, finishing the weekend with a 15-over 159.

Heading into the final round with a two-shot lead over the field, Danilo started out strong playing the first five holes at 1-under. Jack Zejda gave him a run for his money with two birdies, propelling him into the lead by one shot at the turn. In the end, Custer was victorious with only one bogey in his last six holes to secure his first FJT win.

Jack Zejda took home a runner-up finish at 18-over 162, while Gerard Basteiro finished the weekend with a 26-over 170 to earn third place.