Jun and Wu Victorious at Duran 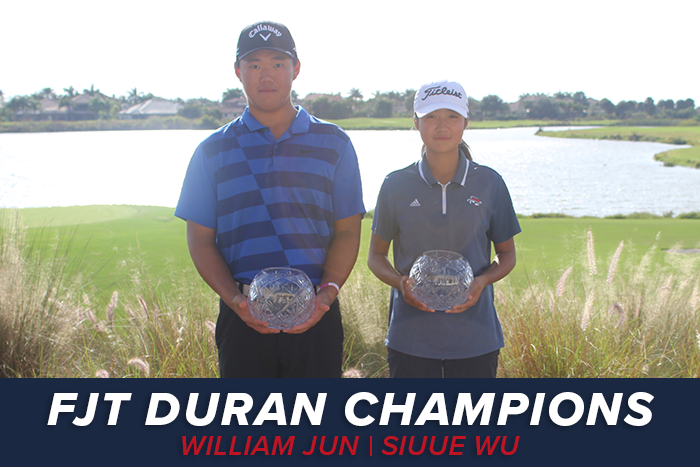 VIERA, Fla. - William Jun and Siuue Wu battled windy conditions in the final round to walk away with Florida Junior Tour victories  at Duran Golf Club.

In round one, only three players broke par for the day, two of which were Alejandro Quintero of Weston and William Jun of Jupiter, who both shot opening rounds of 2 under to tie for the lead.  Quintero had six birdies on the day, while Jun had five making for an exciting day.

It was a tight race going into the final round with a number of players within a few shots of Quintero and Jun.  Colton Swartz, Wilson Stringer, Henry Robards and Raines Holmes all capitalized on the windy conditions to move up the leaderboard to finish in a tie for second place. Jun held on and went wire-to-wire to finish the weekend with the win at 2-under 146.

In the opening round for the Girls division, Izzy Pellot held a narrow lead, firing a 1-under 71 over Kelly Shanahan, who carded an even-par 72.  Kaley Amuso and Siuue Wu were not far off the lead with 1-under 73 to be tied for third.

Trailing by two shots going into the second round, Wu played steady for her first nine holes and then caught on fire on the back making five birdies to shoot 31. The Davenport native jumped up two spots on the leaderboard and ultimately took home the win in a triumphant fashion.  Pellot played consistent golf throughout the event shooting 1-under 143 to earn a runner-up finish. Two players finished the weekend in a tie for third at 2-over 146: Kelly Shanahan and Skylee Shin.