Three Honored as Volunteers of the Year

Kevin Jones, David Jatlow and Patrick Capozzi have been named the FSGA Volunteers of the Year

Jones, Capozzi and Jatlow all tirelessly give back to the game of golf and the FSGA cannot thank them enough for all of their hard work and dedication.

Tournament Volunteer of the Year

Jones has been volunteering with the FSGA for over 10 years, beginning in 2008. His dedication to the game is evident, volunteering at over 15 events in just the last year. Jones is well versed in the Rules of Golf, as a Certified Rules Official, and began serving as a tournament chairman in 2019.

“It’s extremely humbling,” Jones said. “When you look at the volunteer base in Florida, we have over 300 volunteers. Every single one that I have met gives 110 percent and is very dedicated to the game of golf. So to be representing all the volunteers in the state of Florida, it’s an extreme honor and one that I will remember for the rest of my life.”

The Massachusetts native was first introduced to the game in the seventh grade when his friend told him they could get jobs as caddies at Mount Pleasant Golf Club in Boylston, Massachusetts. The highlight of his caddying career came in 1968 when he caddied for Lee Trevino at the Kemper Open in Sutton, Massachusetts, just months after Trevino had captured his first U.S. Open title.

Jones spent 11 years serving his country in the Air Force. After leaving the service, he completed his degree at the University of Massachusetts Amherst and began working as a bank examiner with Federal Deposit Insurance Corporation, where he worked for more than 20 years.

He and his wife, Sandra, retired to Florida in 2006 and Jones was looking for a way to spend his time. Jones had a passion for the Rules of Golf since learning about them from a lawyer he was caddying for in the 1960s, so he attended an FSGA Rules of Golf Workshop.

Jones wanted to give back to the game that has given him so much. So a few years after that first workshop, he began volunteering with the FSGA. His devotion to the game is apparent, having worked 30 tournament days in 2021.

The Naples resident became a tournament chairman in 2019 and has stepped up tremendously in the Southwest Florida area. The game of golf benefits from his passion and hard work.

Course Rating Volunteers of the Year

Capozzi and Jatlow co-caption the Section 12 Course Rating team in the Vero Beach area. They lead a team of six and have already completed eight full ratings in 2021. Both have worked hard to learn The Course Rating System and have demonstrated attention to detail and exceptional organization.

Capozzi worked as an accountant and began playing golf about 37 years ago, when he got talked into going out to play with his coworkers. He recalls giving it a try and immediately falling in love with the game.

“Every time I go out there, I learn something new,” Capozzi said. “I enjoy working with our team members. Two of them have been around for a while and are a wealth of knowledge. On behalf of the team that deserves this award, I thank the FSGA.”

Jatlow began volunteering with the FSGA in 2018, he had always had an interest in handicapping and course rating and wanted to give back to the game. His favorite part of course rating is that it allows him to keep learning every day. The New Jersey native spent most of his life working as a lawyer in Washington, D.C. before moving to Florida with his wife, Jet, in 2005.

It was Jet who first got Jatlow interested in golf. Although he grew up in a golf family, he didn’t pick up the game until 2005 when Jet wanted to learn. It has become something that the couple can go out and do together.

“What I find especially gratifying is giving back to the golf community and learning something new,” Capozzi said. “After being told of the award, I thought this should have been a team award because what I do is a reflection of what our team does.”

Capozzi and Jatlow’s dedication to the game is unmistakable, and both were quick to say that this award belongs to their whole team. 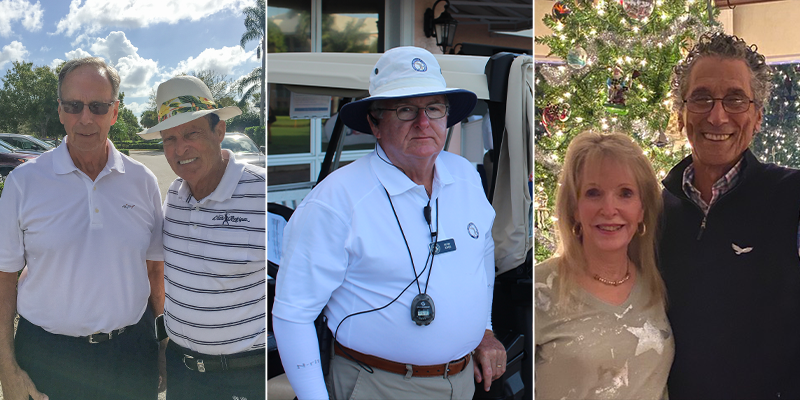