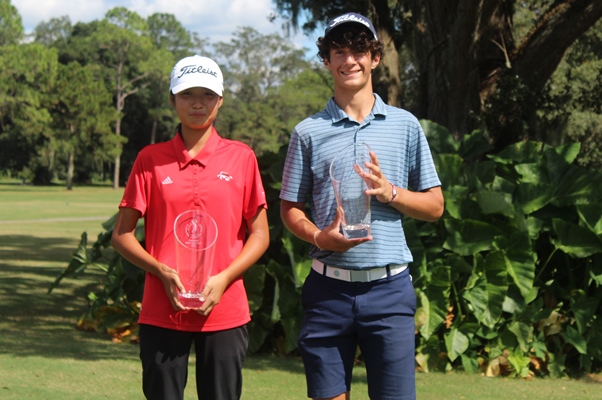 OCALA, Fla. – Shawn Coultoff and Siuue Wu were victorious on Sunday at the Florida Junior Tour event at Ocala Golf Club. Coultoff picked up his third FJT win of this season, while Wu secured her first victory of the season.

Coultoff fired a final-round 68 to claim a two-shot victory at 6-under 138. Beginning the final round in a four-way tie for first after an opening round 2-under 70, Coultoff showed no signs of nerves throughout the day with 6 birdies carded. Three of these birdies were recorded during the final five holes to secure his third FJT victory in 2021.

Carson Yonge and Jeremiah Bianchi played great golf trying to chase down Coultoff. Yonge posted two consistent rounds of 70 for a solo second place finish at 4-under, 140. Bianchi finished in third place and posted the tournament’s low round of 5-under 67 which included an impressive 8 birdies.

Wu began the final round in a tie for first with sister Tsamue Wu after an opening round of 2-over, 74. Siuue Wu took charge of the final round with two consistent nine-hole scores of 34 for a tournament low score in the girls division of 68. After rounds of 74-68--142, Wu finished as the only player under par in the girls division and captured her first FJT victory.

Yingshi (Lydia) Lin and Brayden Smith battled throughout the day to catch Wu. Lin started the day with two bogeys on the 4th,and 8th holes, but rallied with 4 birdies coming in to card the only other under par round in the girls division. Smith also started the day with a couple bogeys, but turned the round around with birdies on the 4th and 7th holes to turn in a final round, even par, 72.