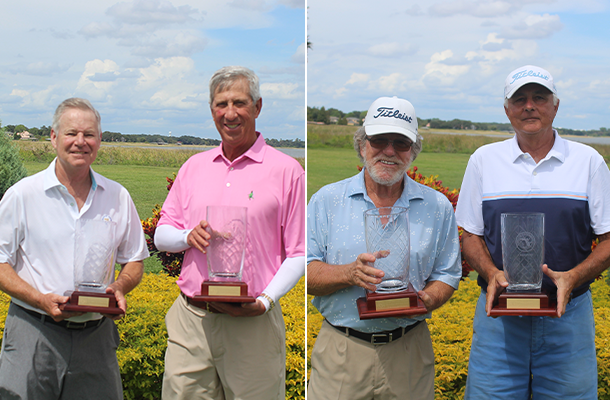 WINTER HAVEN, Fla. – Two teams were crowned Super-Senior Four-Ball champions on Tuesday at The Country Club of Winter Haven. Randy Elliott and David Anthony came out on top in the Championship Division, while Pete McDade and Bob Casamento were victorious in the 70 & Over Division.

Elliot and Anthony fired a final-round 62 to earn the five-shot victory in the Championship Division at 14-under 130. They sat three shots back of the leaders after a 4-under 68 in Monday’s first round.

The teams of Guy Lay / Jeff Cullman and Bill Barnes / Owen Joyner finished tied for second at 9-under 135. Lay and Cullman used rounds of 68-67 to earn a share of second place, while Barnes and Joyner put together rounds of 70-65.

McDade and Casamento took home a commanding win in the 70 & Over Division, securing the 10-shot victory with a 15-under 129 for the championship. The team took a three-shot lead after the first round with a 7-under 65 on Monday.

They got off to a strong start in the final round with Casamento going birdie-eagle on the fourth and fifth. McDade and Casamento made the turn at 3 under for the day. The duo kept it rolling on the back nine with McDade carding an eagle and two birdies. The secured the victory with a final-round 64, the low round in the division.

The teams of Bobby Lundquist / Jerry Young and Mark Rubin / Bill O'Keefe took a share of second place at 9-under 130. Lundquist and Young put together rounds of 70-69, while Rubin and O’Keefe finished the championship with rounds of 69-70.