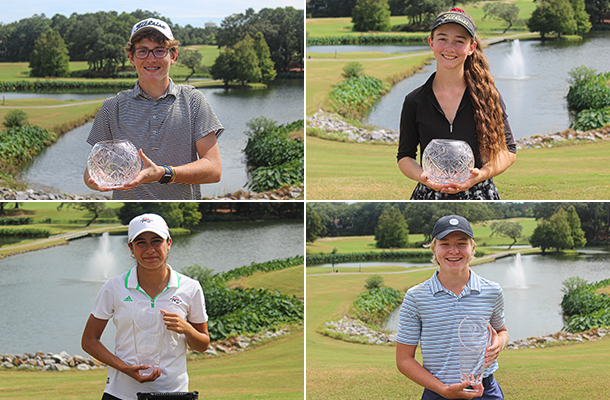 Braydon Moye, of Niceville, shot 71-75 at his home course, taking third place at 2-over par.

Robards was Mr. Consistent, shooting two rounds at even par (72), taking home the Boys (13-15) Division. He entered Sunday's round three shots back, but his steady play earned him a first-place finish. Asher Joseph, of Melbourne, shot 69-79 to come in second at 4-over par.

In third place was Xavier Sahajpal, who carded rounds of 76-74, finishing at 6-over par.

Lefebvre entered the final round three shots back after shooting a 3-over par 75 on Saturday. Her Sunday round of even-par 72 got her into a playoff with Lua Pousa Dacasa, who went 72-75, respectively. The playoff was finished after one hole, where Lefebvre secured her fourth FJT win with a par.

Peyton Maraman brought home third place in this division, shooting 76-74 to finish at 6-over par.

Carrillo held a one-shot lead entering Sunday's round, and she too found herself in a playoff. She shot 73-74, while Siuue Wu shot 74-73, matching Carrillo at 3-over par for the tournament. That playoff also lasted just one hole, with Carrillo making a par to take home the trophy.

Gracie Grant carded a 76-75 to finish in third place at 7-over par.