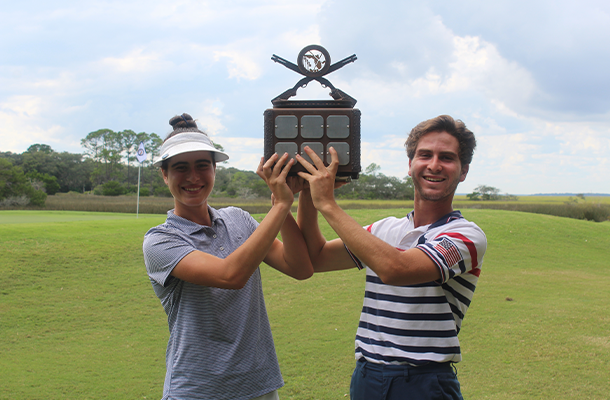 AMELIA ISLAND, Fla. – The sibling duo of Alec Nachmann and Elle Nachmann raised the trophy for the second-straight year on Sunday at the Mixed Shoot-Out Championship. They finished that championship at 13-under 131 at the Oak Marsh Golf Course at Amelia Island.

Alec and Elle were victorious in the Championship Division, capturing the seven-shot victory in wire-to-wire fashion. The teams started Saturday with nine holes in scramble format followed by nine holes of Chapman, modified alternate shot, format.

The Boca Raton duo played steady on Saturday with rounds of 30-32. The duo carded a strong four-ball stroke play score in the final round, posting a 3-under 69.

The team of Ty and Chrissie Capps followed close behind with rounds of 36-36 in round one and finished with a 6-under 66 in the final round to finish runner-up. Ricardo Garcia and Nancy Vergara finished the championship in third at 5-under 68.

Tama and KC Caldabaugh took home a commanding win in the Forward Division, finishing the championship at 6-over 138. The duo posted rounds of 33-37 in the first round. A final four-ball round of 68 gave the Ponte Vedra Beach pair the nine-shot victory.

Robert Flanagan and Liz Boudreaux finished second at 3-over 147, after carding rounds of 35-36 on Saturday and finishing with a final-round 76 in the four-ball portion on Sunday. The pairs of Alan Boyer & Christina Steffen and David & Kim Tassel finished tied for third in the Forward Division at 4-over 148.