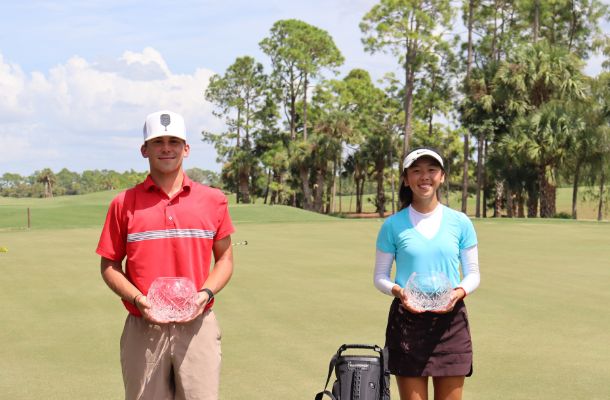 NAPLES, Fla. – Callen Hoskins and Mei Chan post red numbers to win in wire-to-wire fashion at the Golf Club of the Everglades. This is the second FJT win of the year for Hoskins and Chan’s first FJT victory!

Callen Hoskins, of Hobe Sound, and Oliver Marshall, of Naples, tied at the top after round one scores of two under-par 70. Marshall, vying for his first FJT win, played a steady first round with back-to-back birdies on holes 10 and 11. Hoskins, in search for his second win of the year, carded six birdies. The duo led by two strokes heading into the second round.

The second round proved to be a battle for the win between Hoskins and Marshall. Continuing his steady play, Marshall started the round with a birdie to turn at even par. Hoskins turned on the fire starting on the sixth hole, making four back-to-back birdies for a 32 on the front-nine. Despite three birdies on the back-nine, Marshall could not catch Hoskins. Three birdies in a row on the finishing holes secured the win for Hoskins with a final round 66. Hoskins captured his second victory of the year, after his win in January, by three strokes with a 136 (-8) total. A second round of 69 placed Marshall in second place, three strokes ahead of Beni Long, of Lakewood Ranch, in third place.

Impressive play and the tournament low round in the girls’ division, secured victory for Mei Chan, of Orlando. Chan started the first round with a birdie and finished with seven other birdies to post the round low of five under-par 67 to take the lead. Six strokes back in second place finished Amelie Alcantara and Darianys Guzman sat in third place after a round one 74.

Chan continued her strong play in round two, carding two birdies to finish at even par, 72. Boca Raton resident, Kayla Bryant, moved up the leaderboard from fourth place after a second round 74. Chan was untouchable as she finished at five under-par 139 to earn her first FJT win by ten strokes. Bryant finished at 149 in second place with Tabitha Hanely, of Bradenton, rounding out the top three with two rounds of 75 for a 150 finish.