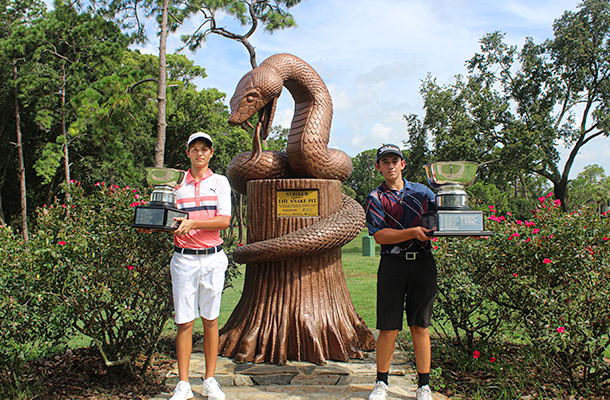 PALM HARBOR, Fla. – The weather and Innisbrook Resort proved to be a tough test, but it was Nicholas Prieto and Matvey Golovanov who came out on top on Thursday at the 67th Boys’ Junior Amateur Championship.

Prieto went sire-to-wire to capture his first FSGA championship. He carded a 5-under 209 to secure the 11-shot victory in the 16-18 division.

“It means a lot,” Prieto said. “This is one of the biggest championships of the year and it’s the one you work hard for. The best junior in Florida coming out to compete on a tough course. To pull through and get the win is really amazing.”

Golovanov captured the four-shot win in the 13-15 division at 4-over 218 to earn his first FSGA championship.

“It’s such a great event, with a great field and a lot of history,” Golovanov said. “It’s the state title, so it so great to win such a big event.”

Beginning the day with a two-shot lead over the field, Prieto got off to a quick start with a birdie on the second. The Miami native added another on the ninth to make the turn at 1 under for the day. Prieto continued his strong play on the back side, rolling in a long birdie putt from the fringe on the 12th.

Prieto added another birdie on the par-3 15th to extend his lead.

“On 15, I was just off the green,” Prieto said. “I hit it a little hard and it hit the pin and went in, instead of about 5 feet by the hole. I think that was a big birdie for me.”

Four players finished the championship in a tie for second at 6-over 220: James Bradley, Carson Brewer, Joshua Stewart and Moses Compaan.

Golovanov got his final round started with a birdie on the second to move to even par for the championship. He native ran into some trouble on the front nine, playing Nos. 2-6 at 4 over. Golovanov turned it around and finished the front nine with tree pars, making the turn at 3 over for the day.

On the par-4 12th hole, Golovanov holed out for birdie from off the green.

“I wasn’t playing that well up until the 12th and I chipped it in for birdie,” Golovanov said. “It got me back into it.”

The Boca Raton native finished the back nine at even par to post a final-round 74 and capture the four-shot win. This is the fourth victory of the year for Golovanov, who has captured three Florida Junior Tour wins this season.

Lev Grinverg and Shawn Coultoff finished tied for second at 8-over 222 in the 13-15 division.