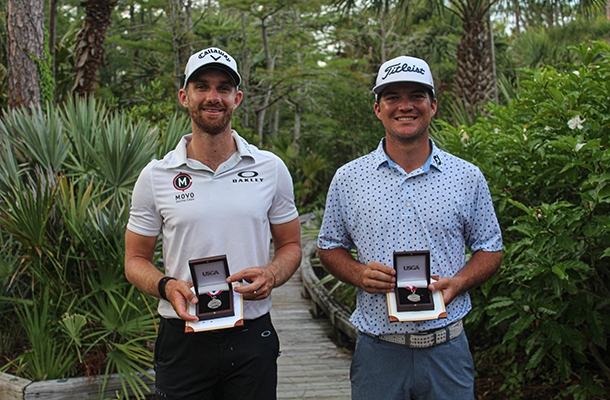 It will be the first U.S. Open Championship for Kozan and Gomez, while Rodger, Grace and Aiken will make a return to the championship.

Rodgers put together two strong rounds at his home course in Jupiter, finishing the championship at 7-under 137. He got off to a hot start, birdieing the second hole. The Indiana native added five birdies to card a first-round 69.

He continued his strong play in the final round, birdieing two of his first three holes and adding a birdie on the 18th. Rodgers kept it rolling on his second nine, birdieing the first and fourth and carding an eagle on the par-5 eighth. The Stanford standout secured medalist honors with a par on the final hole of the day. Rodgers will head to his third U.S. Open and his first since 2018.

“It was awesome to be home. This is my home golf course so I live just up the street so it was a great day out there," Rodgers said. "We had fantastic weather. The golf course was incredibly difficult and it feels great to play well. I’m really pumped to go play another US Open. I feel like it suits my game really well and I love Torrey Pines so I’m really excited."

The only amateur in the field to advance, Kozan put together rounds of 70-70 to finish the long day at 4-under 140. In the morning round, he began with an even-par front nine. He closed out the morning with back-to-back birdies on the 17th and 18th to post a first-round 70.

The Florida Match Play champion got off to a steady start in the final round, birdieing the 10th hole. He birdied the. 17th and 18th again to make the turn at 2 under. The recent Auburn University graduate ran into some trouble on the sixth, but quickly turned it around with a birdie on the eighth. He rolled in a short par putt tp punch his ticket to his first U.S. Open.

“It’s tough to describe words right now," Kozan said. "I’ve got my closest friends and family out here today. It’s been really special. I’ve been close a few times in the past but to finally get it done today was really special having everyone here."

Four players finished the weekend in a tie for third at 2-under 142 to secure a spot at the U.S. Open.  After taking almost two years off of golf, Aiken shot rounds of 70-72 to make it back to the U.S.

“You know I mean I’ve been out of golf for the past couple of years, so to really start again at the US Open is a great privilege," Aiken said. "It’s always tough getting through these 36-hole qualifiers. They’re a grind, but I’m really excited to go back to Torrey Pines. It’s somewhere where I’ve been many times before starting back in 1994 as a junior. It’ll bring back some good memories."

A day after finishing in fourth at The Memorial, Grace earned a spot in his ninth U.S. Open. The South Africa native put together rounds of 70-72 to secure his spot at Torrey Pines.

"It was nice to get back into the mix at a big event and try to win. I didn’t do enough to get through automatically and needed to come here but that was always the plan," Grace said. "It was nice to come to a place where I practice, I call this home here in America. It’s always brutal out there and 36 holes around a place like this is a really tough long day. Just really glad I did what I needed."

For the third-straight time, Gagne advanced through final qualifying to the U.S. Open. The Florida Junior Tour alum fired a final-round 69, birdieing the final hole to grab a spot at Torrey Pines.

“It feels really good. It’s my third, I guess you could say in a row because of COVID," Gagne said. "I’ve been working really hard. Today was a very long day obviously, but I was able to make a couple birdies coming in to get through."