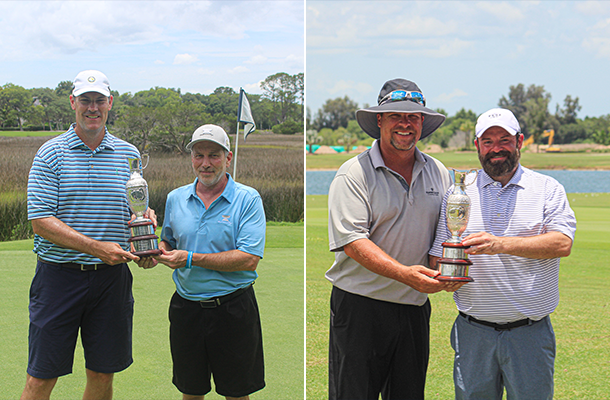 Omni Amelia Island Oak Marsh Course proved to be a good test for the North players. After day one of competition, the teams of John Lobb/Luis Rivera and Steve Pitts/Jeffrey Thorsen led the way. Lobb and Rivera, of Jacksonville, each accounted for 4 birdies on there way to a round of 5-under 67. Pitts, of Jacksonville, and Thorsen, of Ponte Vedra Beach found their way atop the Round 1 leaderboard after a bogey-free 67.

As play began in Round 2, the leaderboard began to tighten as 7 teams found themselves within a shot of the lead with 4 holes remaining. Among them Steve Carter, of St. Augustine, and Andy Purnell, of Jacksonville, soared up the leaderboard with 3 birdies in their first 5 holes. The team of Jon Veneziano, of Fort Lauderdale, and Ryan Abbate, of Mount Dora, were in hot pursuit after a stretch that included 4 birdies in 6 holes. The two teams found themselves tied atop the leaderboard as they played the par-5 18th. Each team would capitalize on good approach shots to make their respective birdies which meant we were headed to extra holes.

On the first playoff hole, both teams had birdie opportunities from 15 feet that they would see just miss. Playing the par-5 9th hole, Carter and Purnell decided to lay up well back on their second shots into the second playoff hole while Veneziano and Abbate opted to test their wedge games coming into the front right hole location. Purnell hit his iron shot in to 7 feet that put all the pressure on Veneziano and Abbate. Ryan Abbate would give his team the best chance to match Purnell with his wedge to 15 feet. However, Abbate's putt would miss just left and Purnell would knock his putt in for the birdie that would seal the championship for Carter and Purnell.

The South four-ball teams faced the Esplanade at Azario Lakewood Ranch for the first championship held at the new facility. The teams of Daniel Debra/Don Whittemore and Wes Taylor/Kevin Henry would take advantage of great scoring conditions and post 7-under rounds of 65 to lead after Round 1. With 19 teams within 3 shots of the lead, the championship was still anyone's to win headed into Sunday.

Daniel Debra, of Lutz, and Don Whittemore, of Temple Terrace, would continue their momentum in Round 2 with birdies on their first 2 holes to take the lead. Slowly chasing them down was the team of Jeff Neugebauer, of Wesley Chapel, and JJ Lee, of Tampa. The duo found their form as they made the turn to the back nine. Birdies on six of the first seven holes on the back nine saw them rise to the top of the leaderboard in a tie with Debra and Whittemore.

JJ Lee would face a 15 footer for birdie on the final hole of the championship with the chance to edge out Debra and Whittemore. As the putt found the bottom of the cup, Lee and Neugebauer would claim their first FSGA Championship. Their rounds of 66-63-129 were good enough for a one-stroke victory. Debra and Whittemore would share a tie for second with Tampa natives Scott Copeland and Matthew Marino at two-day team totals of 130.