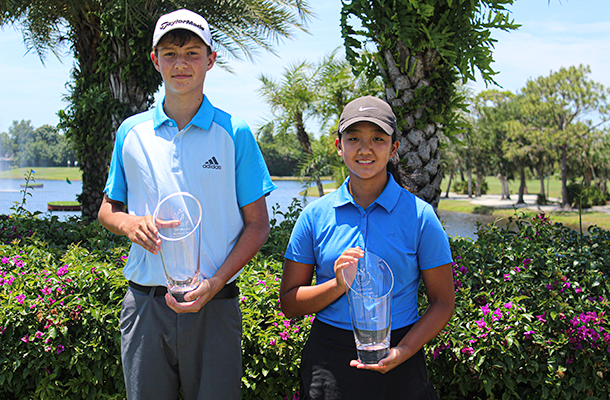 Golovanov fired two red numbers to capture the third FJT win in his career, finishing the weekend at 6-under 136 to secure the three-shot victory. The Boca Raton native started the weekend with a 2-under 70 on Saturday to sit one shot back of the first-round leaders. He finished the day with five birdies and an eagle.

Golovanov earned the victory with a final-round 66, the low round of the event. He was the lone player in the field to card two under-par rounds for the weekend.

Nicolas Bencomo took home a runner-up finish at 3-under 139, firing a final-round 67 to take second place. Shawn Coultoff used rounds of 72-68 to finish in third place at 2-under 140.

Chang erased a six-shot deficit to take home her first FJT victory of the year at 1-under 141. The Sarasota native began the tournament with a 2-over 74 to sit in a tie-for-sixth place.

Beginning the final round six shots back of the leader, Chang got off to a great start with a bogey-free front side, carding birdies on two of the final three holes. She continued her strong play on the back side, birdieing the final two holes of the day.

Chang earned the two-shot win with a final-round 67, the low round of the tournament in the Girls’ Division. She was the lone player in the field to finish the weekend under par.

Layla Pedrique finished second at 1-over 143 after rounds of 70-73, while Sophia Dyer used rounds of 68-76 to take third place. Pedrique and Dyer were the only players to post under-par rounds in the first round.