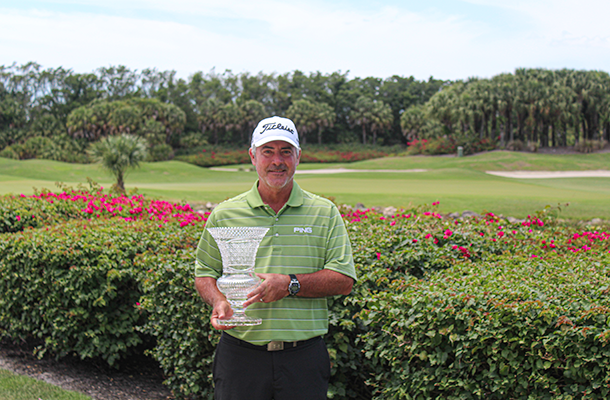 MIROMAR LAKES, Fla. – David Branshaw used the low round of the championship to capture the 44th Florida Senior Open Championship on Wednesday at Miromar Lakes Golf & Beach Club. The Tampa resident fired a final-round 66 to take home the win at 12-under 204.

Branshaw began the final round in a tie for fourth place, two shots behind the leaders, after rounds of 67-71 to begin the championship.

He got off to a quick start in the final round with birdies on four of his first five holes to quickly move to 10 under. Despite back-to-back bogeys on the sixth and seventh, Branshaw made the turn at 2 under for day. Continuing his strong play on the back side, Branshaw birdied the 10th to take the lead at 9 under.

"When I birdied 10, I thought I could be in the thick of it now," Branshaw said.

He went on a commanding run, playing No. 14-17 at 5 under with three birdies and an eagle. The Avilia Golf & Country Club member ran into some trouble on the final hole, finishing with a double bogey, but it was still enough to earn the two-stroke victory.

His final-round 66 was the low round of the championship, as he picked up the win in his first Florida Senior Open appearance.

Miles McConnel secured Low Amateur honors and a runner-up finish, putting together rounds of 68-68-70 to finish the championship at 10-under 206. McConnell, who was also the Low Amateur at the 2018 Senior Open, finished the final round with a bogey-free back nine, with two birdies.

Daniel Olsen and Joe Alfieri finished tied for third at 7-under 209. Olsen posted rounds of 71-68-70 to take a share of third, while Alfieri used rounds of 69-68-72 to finish inside the top three in his Senior Open debut.