Brooke and Keenan Triumphant at Gasparilla 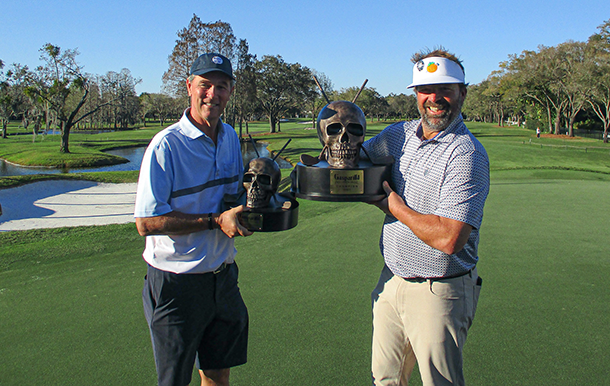 TAMPA, Fla. – One-hundred and forty-one of the top mid-amateur and senior amateur golfers from across the country gathered at Palma Ceia Golf and Country Club in the heart of Tampa last week. The field represented 31 states and included 88 WAGR Ranked individuals. The Sunshine State was well-represented at this year’s invitational, with over 50 Floridians in the field.

Brooke, the 2016 FSGA Mid-Amateur champion, was crowned the 66th Gasparilla Invitational champion after winning in wire-to-wire fashion. The Altamonte Springs native finished the three-day tournament at 5-under 205 to capture the one-shot victory.

On day one, Brooke was firing on all cylinders, carding a bogey-free 64 with three-straight birdies on Nos. 4-6. With wet and rainy conditions in the second round, he was able to weather the storm with a 1-over 71 that provided some separation from the rest of the field.

During the final round it was not exactly smooth sailing to begin the day for Brooke. On the third hole, Brooke accidentally played his fellow competitor’s ball, Tug Maude, for his second shot. Maude played Brooke’s ball for his second shot as well and both players did not realize until they reached the green.

Both players were required to go back and replace their ball in the original spot where they had hit the second shot. Brooke would finish the hole with a double bogey to move to 2-under for the tournament.

“It was like catching an uppercut, I told myself just two putt and make a seven,” Brooke said.

Brooke bounced back quickly, hitting a perfect shot to 10 feet on the par-3 fourth and rolling it in for birdie.

“I knew I had to regroup and try to hit one close on the fourth. That settled me down for the rest of the day and really put me in the right mindset,” Brooke said.

After heading to the fourth tee at the 3 over for the day, Brooke went on to play mistake-free golf with three birdies over his final 15 holes to card an even-par 70 in the final round.

His first-round 64 was the low round of the tournament and he was one of only two players to post an under-par score.

“It’s a huge honor. Very gratifying and rewarding,” Brooke said. “To be able to play an event with this field and these type of conditions. It’s the best amateur tournament in the country, along with the best trophy in the country.”

Keenan survived a playoff to claim the Senior Division title in the 66th Gasparilla Invitational. Kennan finished the tournament tied for the lead with Rusty Strawn at 3-over 213. The Tampa native captured the victory in dramatic fashion after defeating Strawn on the first playoff hole, needing only a par to become the winner.

Keenan fired a 2-under 68 in the first round, posting four birdies on the day with a pair of bogeys on the seventh and the 12th. Conditions proved to be tough on day two with significant rain, but Keenan was able to persevere shooting a 1-over 71.

He struggled early in the final round, shooting 4 over for his first nine holes.

“On the back nine, I told myself to aim at the middle of greens, stop chasing pins, and that par was going to be a good score coming in,” Keenan said.

That proved to be true as Keenan finished the back nine at even par, sinking a 15-foot birdie putt on the 18th to land himself in a playoff. He was able to defeat Rusty Strawn on the first playoff hole, scrambling to get up and down for par from behind the green, solidifying his championship run.

“It means a lot, especially here in my hometown with all of my friends and family watching on the 18th green,” Keenan said. “It was really special.”

The Gasparilla Invitational dates back to 1932. In early years as a professional event, The Gasparilla Open offered the largest purse of any PGA Tournament in the United States. The event would crown World Golf Hall of Fame members, Paul Runyan and Walter Hagen as champions, and the 1935 victory by Walter Hagen was his last ever professional victory. After a lapse, the Gasparilla Invitational resumed in 1956 as a strictly amateur competition and would become a premier event for the country’s best mid-amateurs and seniors.