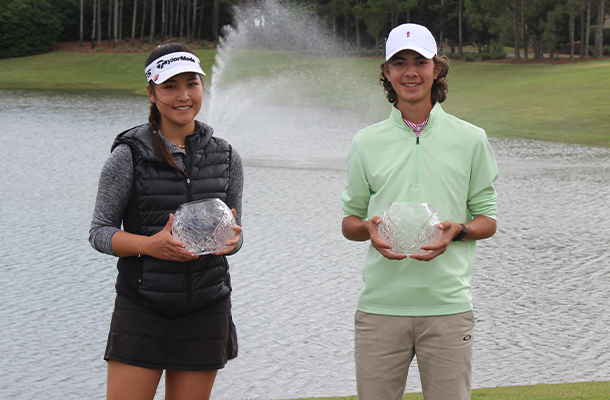 Barraza fired red numbers in Ocala to secure his first FJT win, finishing the weekend at 7-under 137. He fired a 6-under 66 to start off the weekend, posting eight birdies and ending the first round with birdies on three of his final four holes.

Beginning the final round with a one-shot lead, the Parkland native kept it going, posting a bogey-free front side with a birdie on the third. He finished the back with an even-par back nine to put together a 1-under final round and secure the two-shot victory. Barraza was the lone player in the field to post two under-par rounds for the weekend.

Kiko Francisco Coelho took home the runner-up finish at 5-under 139. The reigning FSGA Junior Player of the Year finished the weekend with rounds of 67-72. Ian David finished two shot back of Coelho in third place at 3-under 141.

Wang fought back in the final round to take home her first FJT win with a 1-over 145 for the tournament. She started the weekend with a 1-over 73 in the first round to sit three shots back of the leaders heading into Sunday.

The Lake Mary native got off to a quick start in the final round with back-to-back birdies on the 11th and 12th. She added two more birdies to make the turn at 1 under for the day. Wang ended the day with a 1 over back side to take home the one-shot victory. Her final-round 72 was the only under-par round of the day.

Three players finished the weekend in a tie for second place at 2-over 146L Ellen Dong, Rachel Carlson and Sabree Lefebvre.