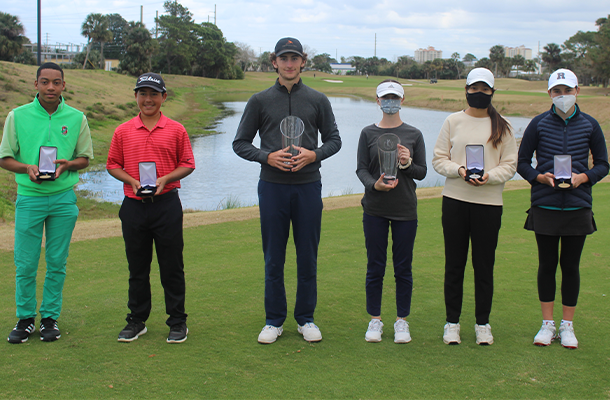 JACKSONVILLE, Fla. – Two first time FJT victories were captured by Lance Hollingshead and Alexandra Pool at Jacksonville Beach Golf Club. Despite the undulating greens and windy conditions, Hollingshead and Pool both prevailed to win by one stroke.

Lance Hollingshead, of West Palm Beach, defined the word consistency with two back-to-back rounds of 73 to earn first place by one stroke over Kelvin Hernandez, of Gurabo, PR. Hollingshead started the final round two strokes back of Taneesh Sirivolu. Sirivolu, of Orlando, took the round one lead after three birdies and an even par 71 finish.

Hollingshead started the final round strong with two birdies in the first three holes and another birdie on hole number eight to turn at 34 (-1). Erasing a two-stroke deficit with a steady final nine holes, Hollingshead secured first place at a 146 total. Hernandez climbed up the leaderboard after a first round 76 to finish in second place. Four birdies earned Hernandez a final round even par 71 to finish with a 147 total. Hollingshead earned his first FSGA victory in his second FJT event played!

The Miami Beach native, Alexandra Pool, captured a wire-to-wire victory in her first FJT event! It was a tight race at the top after round one. Pool took the lead by one stroke over Remi Bacardi, of Miami, and Elan Zhang, of Orlando, finished in third with a 78.

The final round came down to the wire as Pool carded one birdie on the par three, ninth hole to finish with a 79 and 155 total. Zhang lurked close behind, posting a second round of 78 to finish one stroke back of the lead. Despite Bacardi’s impressive front-nine of four birdies for a 33 (-2), Pool held onto the lead. Bacardi rounded out the top three, two-strokes back, with a 157 total. Pool earned her first FJT victory in Jacksonville!