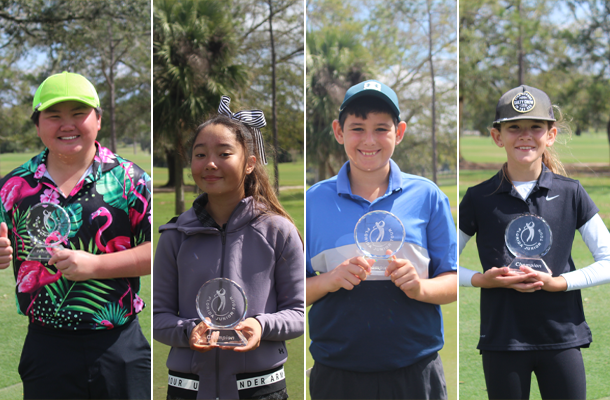 Tsai picked up his first FJT win in dominating fashion, capturing the eight-shot victory with an 8-under 136 for the weekend. He began the tournament with a first-round 71 to take a one-shot lead over the field.

The Michigan native got off to a hot start on Sunday, carding a bogey-free front nine with five birdies, including birdieing four of his final five holes to close out the front side. He continued his strong play, birdieing the 10th and 11th.

Tsai finished the day with a 2-under back nine to post a 7-under 65 and secure the eight-shot win. His final-round 65 is the lowest 18-hole score in FJT history in the Boys 11-12 Division.

Miles Russell took home a runner-up finish, finishing the weekend with a pair of 72s at even-par 144. Joseph Ajax LaNasa finished third at 2-over 146.

Ferry captured her second-straight FJT win in Ocala, putting together a 4-over 148 for the weekend. She posted a 3-over 75 on Saturday to take a share of the first-round lead.

In the final round, the North Carolina native closed out the front side with back-to-back birdies to make the turn at 1 over. Ferry added another birdie on the fifth, before carding two-straight bogeys. She bounced back with a birdie on the eighth and captured her victory with a final-round 72.

Angela Jiang finished one shot back of Ferry in second place at 5-over 149. Jiang carded a final-round 71 to earn the runner-up finish, the low round of the weekend in the Girls Division. Angelina Pacheco finished third at 7-over 151.

Beginning the final round with a five-shot lead over the field, Gordic-Ronderos carded a 4-over front nine. He ended the day with a 4-over back side, adding back-to-back birdies on the fourth and fifth. His final-round 80 secured the six-shot win.

Noah Manly finished second at 13-over 157, while David Cochran finished one shot back of Manly at 14-over 158.

Pedrique used the only under-par score in her Division to take home the win in Ocala, finishing the weekend at 1-under 143. She got off to a strong start in the first round, posting an even-par 72 to take six-shot lead over the field.

Coming out quick in the final round, the Palm Beach Gardens native put together a bogey-free front side, adding two birdies. Her lone bogey of the day came on the sixth, as she closed the tournament with a 1-under 71 to secure the four-shot win.

Alexandra Phung finished second at 3-over 147. The New York native fired a final-round 69, the low round of the weekend in the Girls Division. Leonie Tavares used a 6-over 150 to take third place.