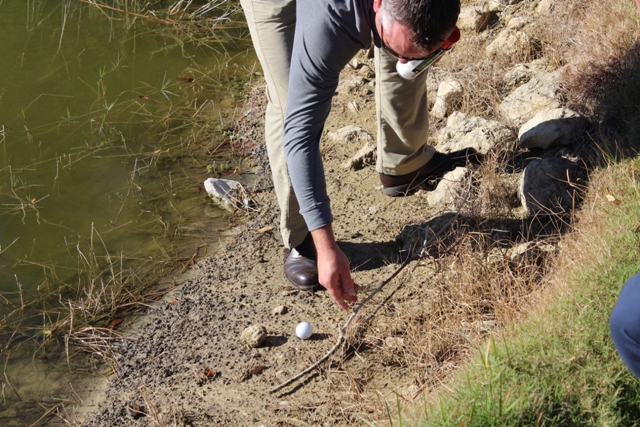 The FSGA is very fortunate to have completed five championships over the past two weeks and crowned many deserving champions. The scores, and stories of how the winners won, are very impressive and I encourage you to visit our past results and news stories. This past weekend we had two rulings that were somewhat similar which are explained below.

I was parked in the shade on the 12th hole at Tampa Palms Golf & Country Club and enjoying watching groups pass by when a player’s tee shot came to rest in the red penalty area. We found the ball and it was lying near some old palm fronds laying on the ground (loose impediments). The player asked if he could move the palm fronds and I said “yes, but be careful because if the ball moves it is a one-stroke penalty.” He asked, “If the ball moves and I then decide to take relief from the penalty area do I still get the penalty for the ball moving?” I answered “yes.” The player thought it was too risky to try to move the loose impediments and took relief from the red penalty area with the one-stroke penalty.

A player with a similar situation the next day approached a Rules Official. The player’s ball was in a red penalty and the player was considering playing the ball as it lies. The player grabbed a club and stepped in near the ball to see if he could play the shot. As he was determining if he could play the shot, he caused some of the foliage to move with caused his ball to move. He then determined it was not worth playing the shot and wanted to take relief from the red penalty area. He asked the Rules Official how many penalty strokes are involved. After confirming on the radio (radios are Rules Official’s best friends!), he informed the player that he incurred two one-stroke penalties; one for causing his ball at rest to move and a second one-stroke penalty for taking relief from the red penalty.

There are four exceptions where the player is not penalized for moving their ball (Rule 9.4b):

Exception 1 – If the player is allowed to lift or move their ball. One example is when the player’s ball interferes with another player and the other player requests that ball to be lifted.

Exception 2 – If the ball is moved when the player is searching for, or trying to identify, the ball.

Exception 3 – Any accidental movement on the putting green.

Exception 4 – Any accidental movement when the player is operating under a Rule and attempts to:

Be careful around your golf ball! One the general principles of the game is to “play the course as you find it, and play the ball as it lies.”

Play safe out there!