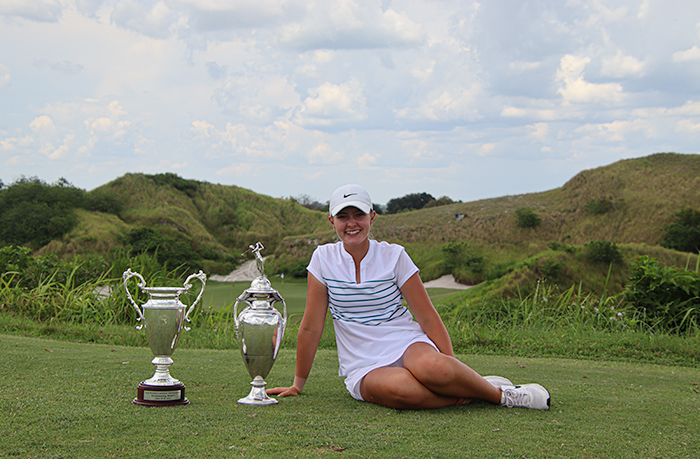 STREAMSONG, Fla. – After 130 holes of golf, it was Bailey Shoemaker who raised the Women’s Amateur trophy at the end of the day. Shoemaker defeated Maisie Filler, 3 and 2, on Sunday at Streamsong to win the 93rd Women’s Amateur Championship.

"This win is just so incredible," Shoemaker said. "It’s one of the oldest state championships and there are so many iconic winners and people that have gone on to do great things as professionals and great things for the game. I am just so honored to be added to that list."

The morning saw Shoemaker earn a commanding win over Casey Weidenfeld, 5 and 4, while Filler defeated Yoko Tai, 2 and 1, to advance to the Finals.

In the Final match between Shoemaker and Filler. Shoemaker took a quick 1-up lead on the second hole with a short par putt. She extended her lead to 2 up, rolling in an 8-foot putt for birdie on the fourth.

“The best part of my game this week was throwing shots in kind of close,” Shoemaker said. “I’ve been working on that an lot the last couple months. So to see it bleed into my game here was pretty great. I also made an lot of putts to put some pressure on my opponents.”

On the par-3 fifth hole, Filler just missed her par putt to give Shoemaker a 3-up lead heading to the seventh. Filler’s drive was just short of the green, she chipped it to 2 feet and made the putt for birdie to win the hole.

Filler and Shoemaker halved the seventh and eighth, heading to the ninth with Shoemaker 2 up. Filler birdied the par-5 ninth hole to cut Shoemaker’s lead to 1 up as they made the turn to the back side.

Shoemaker, a Dade City resident, extended her lead to 2 up again with a par on the 11th. An incoming junior at the University of Florida, Filler birdied the 13th to cut the lead back to 1 up. On the par-4 14th hole, Shoemaker’s second shot was short-left of the green. The Florida Junior Tour winner chipped it to 2 feet and made the putt to extend the lead to 2 up

“I continuously birdied the 14th hole this week,” Shoemaker said. “I think that put some pressure on Maisie and really closed it out.”

Shoemaker rolled in an 12-foot birdie putt to take an 3-up lead with three to play. She secured the championship with a par on the 16th hole, taking home an 3-and-2 victory against Filler.

Shoemaker is in the midst of an standout summer. The two-time FSGA championship made the cut at her first U.S. Women’s Open Championship earlier this month, finishing inside the top 50.