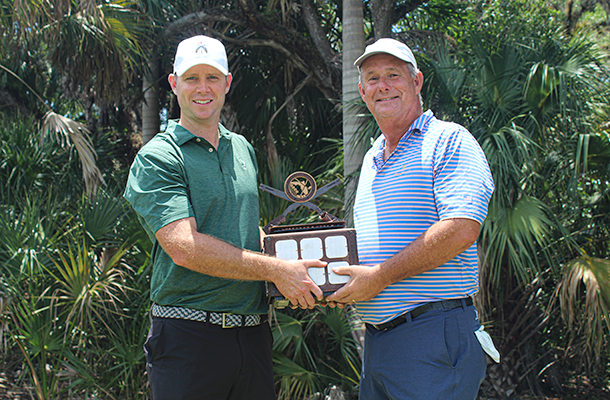 FORT MYERS, Fla. – Mike Finster and Devin Hernandez captured the Two-Man Shoot-Out on Sunday in wire-to-wire fashion at Verandah Club Golf Resort, posting a 25-under 191 for the championship. This is the third FSGA victory for Finster and the second for Hernandez.

The championship began on Saturday with teams competing in modified alternate shot. It was tight at the top of the leaderboard with nine teams sitting within three shots of the leaders. Ty Capps and Kevin Lewis took the first-round lead with a 6-under 66.

Hernandez and Finster sat one shot back of the leaders at 5-under 67 in a tie for second place with Joe and Cade Alifieri. Dennis Riedel and Kevin Johnson posted a first-round 68 to take fourth place, while six teams sat in a tie for fifth at 3-under 69.

The teams competed in the scramble portion on Saturday afternoon. Finster and Hernandez shot a second-round 58, the low round of the afternoon, to take the 36-hole lead at 19-under 125. The pair finished the afternoon with a bogey-free round, carding seven-straight birdies on the front nine and adding an eagle on the 15th.

Marc France and Carl Santos-Ocampo posted a 13-under 59 in the second round, while Thomas Parker and Matt Broome finished at 12-under 60. The teams of Santos-Ocampo/France and Airik Medinis/Blake Biggs finished the day in a tie for second place at 14-under 130.

The championship finished with a four-ball round on Sunday. Finster and Hernandez got off to a slow start with a double bogey on the third, but quickly rebounded with an eagle on the par-5 ninth. They captured the three-shot victory with a final-round 6-under 66.

Santos-Ocampo and France made a charge at the title. They started the day with a bogey-free front nine, carding four birdies. They fired an 8-under 64 to take second place at 22-under 194 to finish three shots back of the champions. Medinis and Biggstook home a third-place finish at 21-under 195, while two teams finished tied for fourth at 20-under 196: Dennis Riedel Jr / Kevin Johnson and Joe Alfieri II / Cade Alfieri.